New rumors of a 13-inch Retina MacBook Pro being on the horizon have begun doing the rounds, with claims that the device is real being backed up with benchmark results that have cropped up online. The as yet unannounced device is also expected to begin arriving in people’s hands around October time, according to reports.

The rumor that a 13-inch Retina MacBook Pro has been bubbling along nicely of late, but new benchmarks that have appeared online appear to add credence to claims that the device is not too far away from being available to customers.

The benchmark results in question come from the popular app, Geekbench, with the results putting the device squarely between the current shipping 13-inch MacBook Pro model and the recently released 15-inch Retina display-equipped model that we have all been lusting after of late.

The current 13-inch MacBook Pro sees a Geekbench result of 5,000, with the 15-inch Retina model coming in at almost 11,000. The new, unannounced model that has cropped up online however sits bang between those two, with results around the 7800 mark. Featuring an Intel Core i7-3520M Ivy Bridge processor clocked at 2.9GHz, there is now doubting the power that this machine apparently features, but until we see Apple announce the machine then the 13-inch Retina MacBook Pro is just something we all hope is on its way but is far from guaranteed. 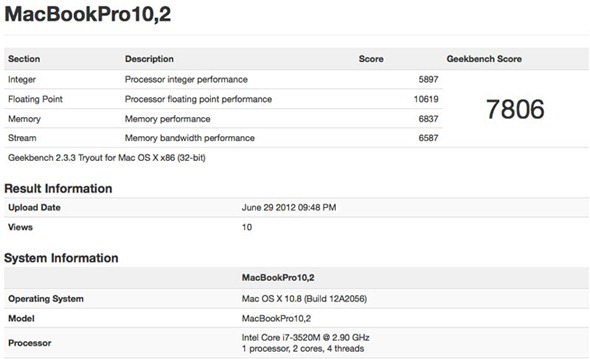 The Retina display and its appearance in the MacBook Pro lineup has taken laptop screens to a level that many of us never thought would be possible, at least not yet. Whether the extra pixels make that much difference in real world use is something that will be argued for some time, but few can argue that the potential is there for when apps begin to really take advantage of the extra resolution afforded by the Retina display.

Further potential evidence of a 13-inch MacBook Pro comes in the form of claims by the notoriously fallible DigiTimes that upstream suppliers are getting ready to provide parts for the machine. As is always the case though, we’re going to take that with a decent pinch of salt.