CardSwitcher Updated To v2.0 With Support For iOS 5 And iPad, New Features, And More

If you ever decided to take the time to sit and sift through the hundreds and thousands of packages that live within the default repositories in Cydia, I would imagine you would need to set aside a fair portion of your week in order to get through them all. With that said, even if you managed to sort through the packages, you only come out with a handful of tweaks or extensions that would be classed as essential installations for your jailbroken iOS device.

My own personal Cydia account is rammed full of purchases that I have made in the last few years, with the majority of the purchases being small tweaks designed to alter a tiny part of iOS, or something that I just thought looked good at that time. After using the extensions for a few days, the truth is that most of the purchases haven’t been used since and although they are available for me to download; I choose not to as they are what I would class as flash in the pan tweaks. Opinions may differ on this topic, but I tend to find that for my uses, only a handful of Cydia-based packages would fall under the essential category. 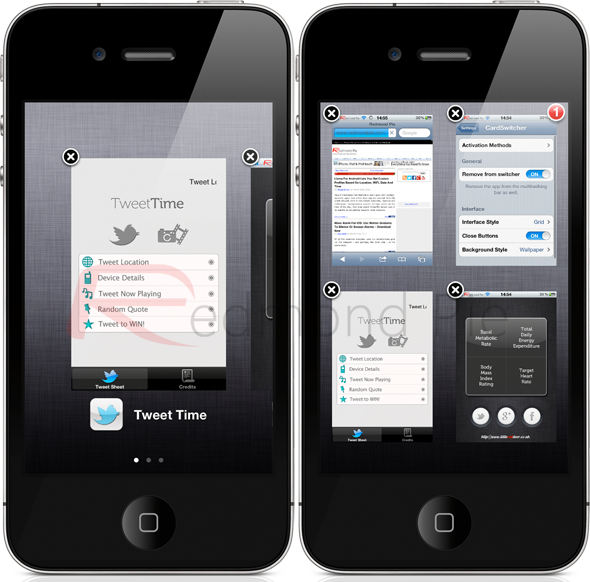 A tweak known as CardSwitcher has been around for quite some time, has received a lot of attention and may be familiar to some of you. Due to the fact it kind of offers the same functionality as the Multifl0w tweak, it has previously been overlooked, as people opt for the software associated with Aaron Ash’s name who has gained popularity with his Barrel extension. The developer of CardSwitcher has spent the last few months rewriting and re-imagining his work to bring it up to date and make it fully compatible with devices running iOS 5. Version 2.0 has recently been released onto the BigBoss repository with the following changes:

The latest version brings an impressive array of improvements, but what about the underlying core functionality of CardSwitcher? Well, the tweak itself can essentially be classified as one that reworks the way multitasking is handled on the device, bringing a visual interface very similar to the now defunct webOS. When the multitasking experience is invoked, either through the standard iOS method or by setting your own through Activator, the native switcher tray is replaced by either a tiled or grid view depending on which is active through the tweak’s settings bundle. The new view allows all backgrounded applications to be seamlessly swiped through and either brought to life again, or removed from multitasking altogether by either pressing the familiar red delete option or using a vertical swipe. 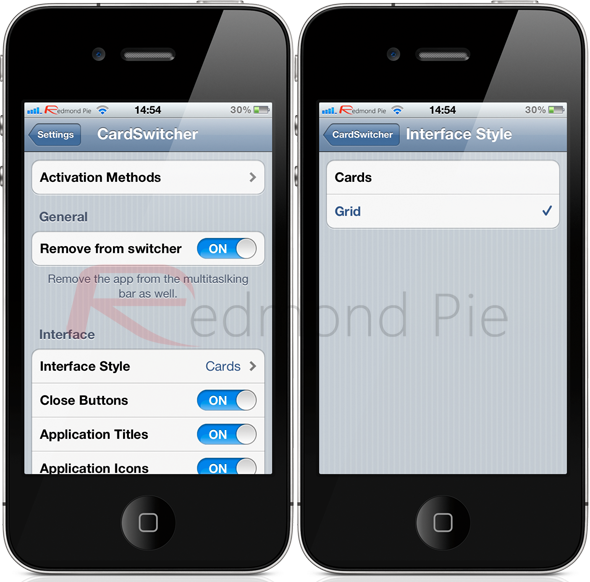 One of the most beautiful parts of the tweak is the inclusion of the live app tiles. Unlike other tweaks of a similar nature which simply display a static image, CardSwitcher shows a live view of the application including any outstanding badged notifications if relevant. Although the CardSwitcher tweak has been rewritten for iOS 5 support, it also features backwards compatibility with every firmware version from iOS 4 to the latest, which is 5.1, which should be enough to cater for all jailbreak needs.

For me, the CardSwitcher tweak essentially takes something that wasn’t broke and fixes it. Native iOS multitasking isn’t something that is in dire need of a makeover and it exists for a purpose and serves that purpose quite well. However, CardSwitcher manages to make the whole multitasking experience for a more, intuitive and extremely visually appealing with a set of stunning animations. The tweak is available on the BigBoss repository at a cost of $1.99 and is available for all iOS devices running iOS 4 and above.