UberTwitter is one of the more popular Twitter clients which was previously exclusively available for BlackBerry users, accounting for more than 10 million tweets each day. It has now become available on the iPhone due to the growing success of the iOS mobile platform.

Apart from offering standard Twitter features like tweeting, re-tweeting, direct messaging and link shortening, the major distinguishing feature is UberView, which allows access to links within tweets without exiting out of the app or even opening a new window within it.

Holding the device horizontally moves the app into the landscape view which splits the screen in half, with the tweet on the left hand side and the linked content on the right. Cool features like this are tempting but at present UberTwitter displays ads at the bottom of the screen, which essentially, is distracting and occupies screen real estate.

The final v1.0 release is scheduled to be released in the middle of December. 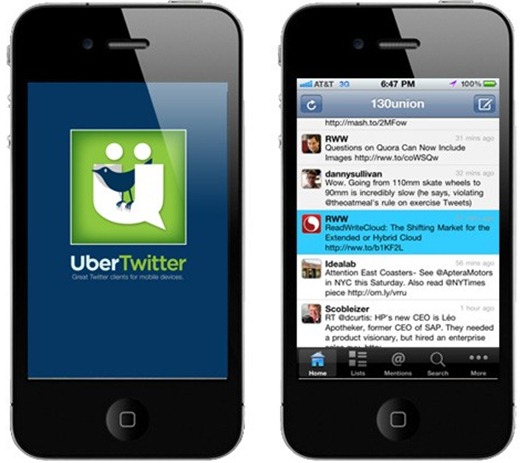 ŰberTwitter, the world’s most widely used Twitter app for sending and reading tweets, announced today that a beta version of ŰberTwitter for iPhone is now available as a free download from the Apple App Store. Until now, ŰberTwitter has been exclusive to RIM’s BlackBerry devices, where it was one of the first Twitter client apps to be available for the platform and set the standard for features and functionality. Today, more than nine million users have downloaded ŰberTwitter, and they send approximately 10 million tweets a day with the app.
In addition to traditional Twitter client features – such as composing and sending tweets, retweeting, direct messaging and embedded link shortening – ŰberTwitter for iPhone offers an important new feature called ŰberView that makes reading tweets faster and easier. Either by tapping the tweet in portrait mode or turning the phone to landscape mode, users will be able to view and use content from any embedded link (e.g., webpage, photo or video) instantly without leaving the app or opening a new page within it. Over 10,000 people have already downloaded the current beta release and are providing great feedback. The version 1.0 full production release will be available by mid-December, and will incorporate many of the suggestions made by the beta users, as well as a number of other features.
"Given the iPhone’s growing dominance among smartphone users, we wanted to extend our product offering to its users while making sure our app offered features that would complement the platform’s unique functionality," said Paul McDonald, CEO of ŰberTwitter. "For instance, ŰberView will enhance the way users consume content. As more tweets become vehicle for sharing articles, photos and videos, this feature will become ever more indispensable."
"One of the most important aspects of the new ŰberTwitter for iPhone is ŰberView," said Sean Callihan, CEO of Plixi. "Plixi serves millions of images every month to ŰberTwitter users, and our business is all about creating easier and more intuitive ways for customers to share and view images. With ŰberView, ŰberTwitter has once again demonstrated their leadership in the Twitter client space, this time on the iPhone platform."
Additionally, ŰberTwitter will continue to encourage its users to share their suggestions for new features as it did with its original Blackberry offering. Within the app, there is a button where users can submit their ideas, and the feedback will be used to prioritize development efforts on some of the remaining, popular features of the BlackBerry version that have yet to be added to the iPhone beta version.
For more information, please visit www.ubertwitter.com.