Banners Go Up At Moscone West For WWDC 2012: “Where Great Ideas Go On To Do Great Things” [PHOTO]

With Apple’s WWDC for 2012 set to kick off in just a few short days, anticipation is already growing to what we can only describe as fever pitch. Monday is the day that all the madness really gets into full swing, and with Apple’s custom opening conference comes all the hype of an iPhone or iPad announcement. Except it isn’t.

While the whole shebang is actually for developers of applications for both the Mac and iOS platforms, it is us, the general technology-loving public that get excited at the idea of a new device or new software being unveiled at the event, and this year is no exception.

With a new, sixth release of iOS expected to be demonstrated this year, along with possible Mac updates along with new MacBooks and Mac Pros, all eyes are on the event, and we aren’t even in the same week yet! But what should we be expecting?

The latest clue, if we can call it that, is the news that banners for the event have already been erected. Their slogan, "Where great ideas go on to do great things." may not tell us a great deal, but that won’t stop people analyzing them for every little clue.

Our educated guess, and it isn’t based on these new banners, is that Monday will see the iOS 6 that we are all waiting for. It is almost given that there will be no new iOS hardware to speak of, and with the iOS software proving to be a real focus for Apple we suspect some fancy new features are on the horizon. As ever, Facebook integration is rumored to be one of those new features, but we will just have to wait until Monday to find out for sure. 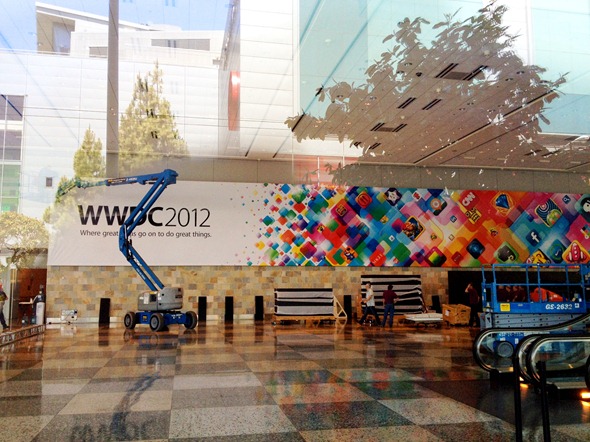 As for Macs, talk of new Mac Pros and improved MacBook Pros just will not die, with the former very much overdue a refresh. Is this year’s WWDC going to bring the powerhouse machines up to the exacting standards of the professionals that use them? Time will tell.

If there is one thing we have learned from past experience it is that someone, somewhere will be disappointed by the end of Monday. Let’s hope it’s not those of us crossing our fingers for iOS 6!