Facebook has evolved into something much, much more than what it was when the social networking platform entered the arena. The service has today become the most popular, almost viral social network, and no matter what they say or do, and no matter how many controversies they face, Facebook’s user base continues to grow. On their own part, the Palo Alto company continues to improve the feature set that the web app has to offer. That includes their mobile applications for Android and iOS as well, which are a large means to access the platform for a majority of users.

With its last major update, Facebook for Android not only went native, but also received a huge user interface overhaul, resulting in a much faster and more streamlined experience. However, it remains no hidden fact that the Android variant of the official Facebook app falls far behind its iOS counterpart. Fret not, for there are a variety of third-party offerings to handle that. Those, however, also suffer the dilemma of broken connections, slow loading speeds and generally missing quirks. Enter Atrium – a new Facebook app that aims to change the game altogether. 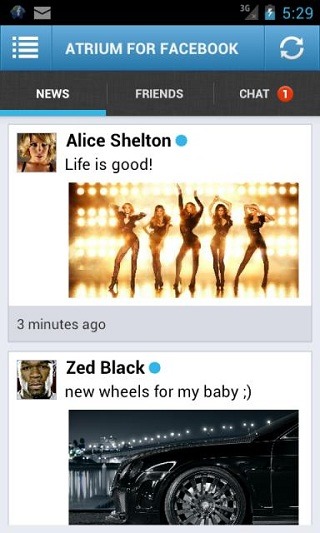 Atrium basically looks at providing an alternative Facebook experience by focusing on those areas that users most frequently. While it’s a fully-functional Facebook client, if you’re looking for something that would cater to all your social networking needs on your Android smartphone or tablet, look elsewhere, for the app revolves around sharing updates and staying up to date with your News Feed. Sporting a Holo-themed UI, Atrium comprises three main tabs, viz. News, Friends and Chat. News, obviously, consists of your News Feed, displaying shares from your friends. The Friends tab allows you to not only communicate with the group, but also view their timelines. Finally, Chat lets your communicate with your buddies via Facebook’s integrated instant messaging service. 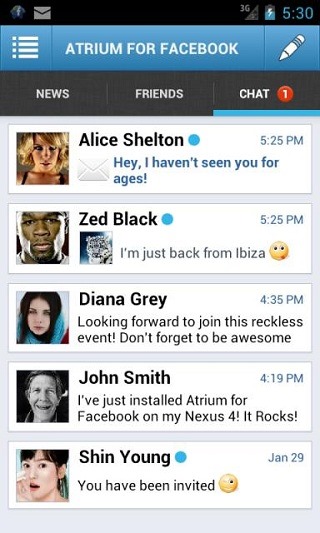 The official description for Atrium pitches the following feature set:

• Instantly see who’s online on Facebook
• Explore your friends’ profiles, including photos, videos and timeline;
• Share status updates, photos and videos;
• Get notified when friends like and comment on your posts;
• View hi-res photos directly in the news feed;
• One-click access to comments and likes in the news feed;
• Send instant messages to your friends (even when they are offline);
• Express your emotions with cool smileys and rage faces;
• Quickly access your complete Facebook chat history;
• One-click access to your most recent conversations;
• Check-in at interesting places all around the world;
• No additional fees, 100% free! 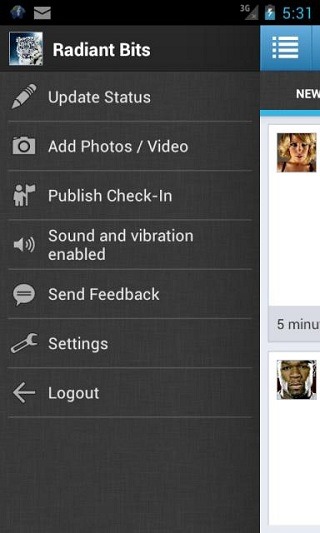 The app is currently in its nascent stage, and therefore, holds a lot of room for further development. Overall look and feel is really polished, and the best part in my day’s test run was the speed at which it loaded content. I didn’t experience any crashes at all, either, and am overall thoroughly pleased with the user experience that it delivers.

If your primary usage of Facebook revolves around sharing status updates, pictures/videos and check-ins with your following, Atrium is a must-have for all Android users. The app is available for free for at Play Store for all users running Android 2.3 and above.