Apple’s Tim Cook Is 2nd Highest-Paid CEO In The US, According To A Report

A new Bloomberg 2019 pay index details the amount of money top executives across the United States raked in last year with Tesla’s Elon Musk coming in top. However, Apple CEO Tim Cook was in second despite a relatively small salary.

That’s apparently because of the bonuses and stock options that he was awarded but he still found himself a fair way short of top spot.

Elon Musk apparently raked in a massive $595.3 million throughout 2019, while Cook earned a relatively small $133.7 million. While we already saw Cook’s numbers when Apple itself announced them in January, it’s interesting to see them alongside other top executives.

Cook is known for giving his money away to good causes. He gave $2 million to an unnamed charity last year and he also plans to give his entire wealth away at some point. As if we needed another reason to respect the guy. 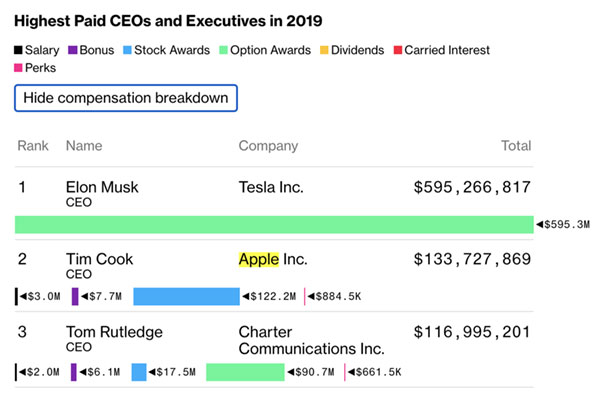 Of course, the bigger question is whether any of these people are worth the kinds of money we’re talking about here. But that’s probably a discussion for another time!

You can check out the full report, alongside yet more interesting numbers, over on Bloomberg.