It’s been quite a steady year for mobile OS usage this year. Worldwide, the top eight mobile OS platforms have relatively stayed in their same positions, in terms of usage, for most of the year. While Symbian OS has kept its throne successfully, the real action is between iOS and Android.

In a report published by Global StatCounter, Android has increased in popularity since the beginning of this year when it overtook BlackBerry to secure third place. After a heavy climb in usage it surpassed iOS in August, but it was short-lived. It only was able to secure the lead for the remainder of the month.

In October, Apple increased sales and popularity worldwide, allowing it to reclaim second place, but only by a small margin. We can see a much stronger lead in November, probably due to the introduction of the iPhone 4S; Apple sold four million of the units in the first weekend alone, becoming the fastest selling phone in history. 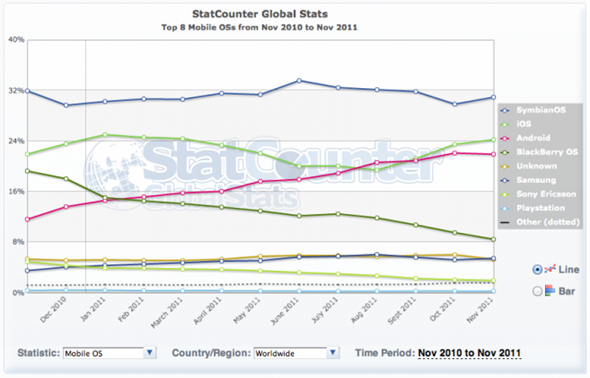 StatCounter has also been tracking mobile browsers for the year. Opera has remained in the number one spot, while iPhone and Android once again battle for second place. November ended with Android securing 20.41 percent shares and Apple with 19.53 percent. These statistics indicate that Apple’s iPad models are fueling an increasing lead over Android’s smartphones, which have a lighter usage of web browsing.

Another researching firm, Net Applications, collects data from fewer websites (40,000), but their published reports appeared to confirm StatCounter’s findings with minor differences: One being both Android and Apple losing some shares to other OS platforms. 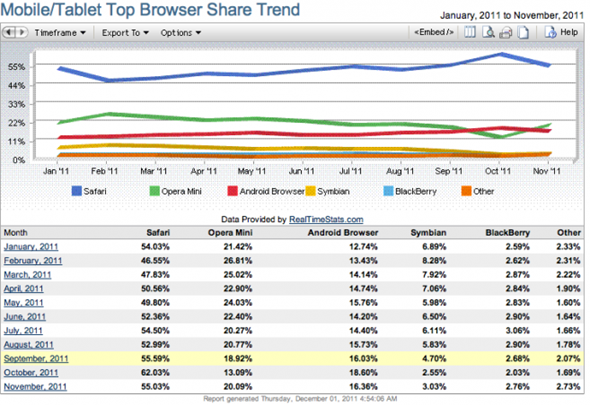 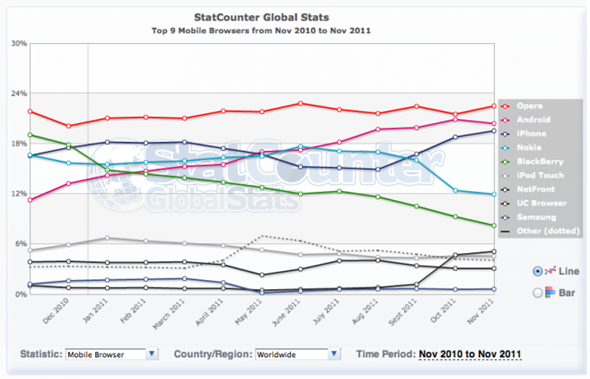 Mobile browsing accounts for 6.95 percent (6.55 in October) of web traffic in November. While the mobile OS statistics are worldwide, StatCounter allows you to select and view results from a specific country or region. In the United States, for example, the battle for most popular mobile OS between Apple and Google is as fierce as ever with iOS in the lead by small margin.