As much as Apple wants to appear to be giving its existing and potential consumers what they want, the company doesn’t make hardware and business decisions based on pure romanticism. The introduction of the iPhone SE at last weeks’ “Let us loop you in” event may have instantly appealed to a large customer base looking for something akin to the iPhone 5s, but Apple would have been looking at the bigger picture and what it means for customer acquisition as a whole.

Now, a new data which has come to light is revealing that the introduction of the $399 iPhone model seems to be instantly paying off for Apple by convincing more customers to churn from Android in favor of Apple’s iOS platform.

Apple has made no secret of the fact that it is continually looking for ways to entice more consumers to leave the Android ecosystem in favor of iOS and the devices that it powers. As part of those efforts, Tim Cook and his team have tried to give Android users what they craved with larger iPhone devices in the form of the iPhone 6/6 Plus and iPhone 6s/6s Plus.

With that said, this new data seems to suggest that the iPhone SE is attracting a higher rate of Android users across to iPhone than any model before it:

Early data from Slice Intelligence indicates that the SE may help Apple grow its maturing iPhone consumer base. Only 35 percent of iPhone SE buyers purchased an iPhone online in the last two years, and 16 percent of them were previously Android users. 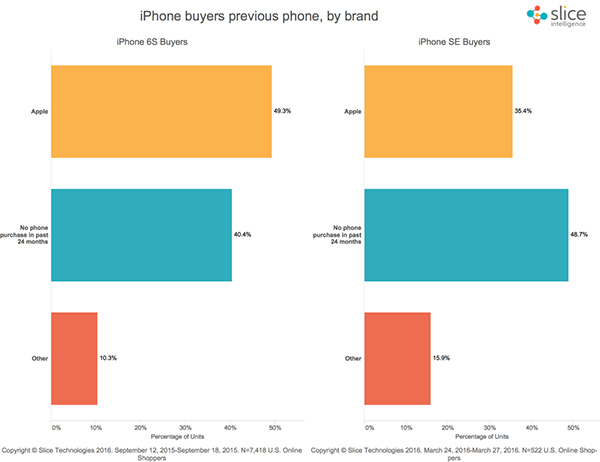 When compared with data from Apple’s previous iPhone 6s release, it seems that the $399 iPhone SE could be doing more for the cause than the current flagship managed:

By comparison, 49 percent of iPhone 6s buyers upgraded from a previous iPhone, and 10 percent replaced an Android device they bought online within the past two years. 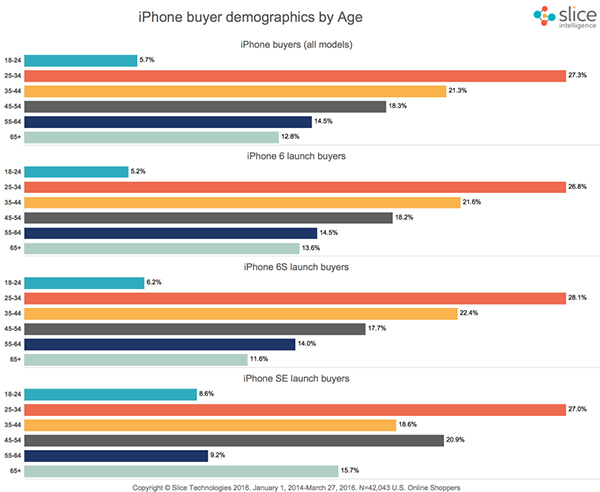 Data is also available on the type of buyer who has instantly shown an interest in the new iPhone SE. The analytics suggest that the iPhone SE purchaser is “older, less educated, and surprisingly, more male” than those purchasing other iPhone models. Nearly 21-percent of those purchasing an iPhone SE are in the 45-54 age bracket, with 77 percent of buyers being male.