If you are on the lookout for a new Apple Watch but want to be able to save a few dollars, then you are in luck, because Apple has updated its US-based online store to include a selection of refurbished Apple Watch Series 3 models, marking the first time the most current Apple Watch has appeared online.

The Apple Watch Series 3 was first released in September of 2017, meaning it has taken almost six months for refurbished wearables to make their way into stock.

The choice, however, is not huge. Right now, there are two refurbished Apple Watch Series 3 models available, and they are both sans-4G connectivity. They do both carry a $50 discount on their normal retail price, however, meaning around a 15% saving on what you would expect to pay if you walked into an Apple Store and bought a brand new Apple Watch. There are, currently at least, no stainless steel or ceramic versions of the Apple Watch available as refurbished items.

Of the options that are live right now, there is a 38mm Apple Watch Series 3 in Gold Aluminum with a Pink Sand Sport band, available for $279, down from the normal price of $329 for a new one. There’s also a 42mm Space Gray Aluminum offering with a Black Sport Band costing $309, down from $359. 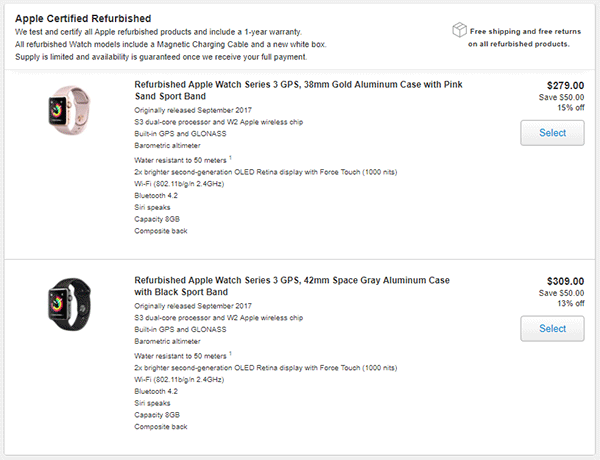 We would expect other watches to make their way to the refurbished store in due course, although it is, of course, impossible to guess when that may be.

No matter which Apple Watch you plump for, they will all have gone through a full refurbishment process before being placed back on sale and all carry a one-year warranty that can also be extended should AppleCare+ be bought as well.