The Apple Watch is essentially the smartwatch market at this point, with an estimated 35.8% of the share according to recent numbers from Counterpoint Research. That statistic covers sales for January through March.

While Apple sits pretty at the top of the tree, and by some distance, Samsung takes up second place with just 11.1% of the market. That result is at least an increase on the previous year, which saw a 7.2% result.

The Apple Watch Series 4 has largely been very well received by both reviewers and buyers alike, and Counterpoint Research’s recent Consumer Lens survey shows that the ECG functionality was the latest Apple Watch’s biggest and most desirable feature. That feature is one that recently went live in 19 countries after spending some considerable time as a US-only affair.

Commenting on the major shift in the market, Counterpoint Research Analyst, Satyajit Sinha, noted, “Apple Watch shipments grew a solid 49% YoY despite the weak demand for its iPhones. Apple continues to focus on the health-related features like ECG and fall detection in the Apple Watch Series 4. The ECG capability in the Apple Watch is the most desirable feature, according to our latest Consumer Lens survey. Apple has now received approval on its ECG features from healthcare authorities of Hong Kong and 19 other countries including France, Germany, Italy, Spain, and the UK.”

Apple, for its part, doesn’t spin Apple Watch sales out when sharing its own figures, instead choosing to include it in a Wearables, Home, and Accessories category. According to the recent March quarter numbers, however, that category managed a record revenue of $5.1 billion, likely fueled by the success of the Apple Watch Series 4, with AirPods also expected to be helping out there. The HomePod and Apple TV were less likely to be big sellers in that category. 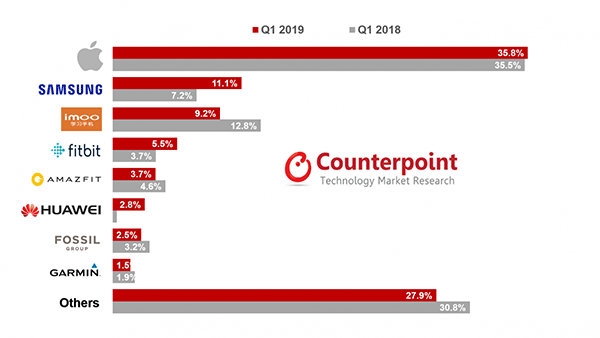 At this point, it’s clear that the smartwatch market continues to play catch-up with the Apple Watch, but while there are other manufacturers working around it, there is always the chance that one will hit the winning formula. For that reason, we expect Apple to continue to push the Apple Watch envelope in coming years.