The Apple Watch Series 4 launched in late 2018, but it was only recently that the wearable’s impressive ECG functionality was given the green light in Europe.

That gave many, many people their first glimpse at what the Apple Watch Series 4 is capable of, and one of those was a skeptic in Germany.

The person is unnamed, but he apparently didn’t believe in the ECG feature, believing it wasn’t for anyone other than “hypochondriacs.” That was, until he tried it.

In a letter that the person sent to Dr. Michael Spher of Germany’s FAZ newspaper, we’ve learned that he took the ECG feature for a spin “just for fun.” The results were alarming, with the watch repeatedly suggesting that he suffered from atrial. fibrillation.

Despite his belief that the feature was essentially a gimmick, the user went to his own doctor who carried out a traditional; 12-point ECG and low and behold, the Apple Watch was indeed correct in its claims of Afib. 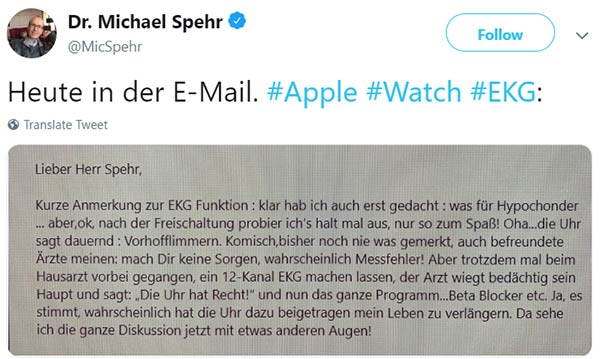 Now that he’s under medication to deal with his illness, the same user says that “it’s true, the Watch contributed to prolonging my life,” which is about as ringing an endorsement as you can get.

We’ve heard of people essentially having their lives saved by an Apple Watch with amazing regularity over the years, and this may just be the latest instance of that taking place.

We’re pleased that this person was able to get the care he clearly needed, and it’s another example of how an Apple Watch can identify issues, even when the wearer isn’t aware of any themselves.