Blendtec and Tom Dickson are back and have released a new video of their famous “Will It Blend?” experiment. Dickson will be blending the just-released Apple Watch, so check out how Apple’s new wearable holds up to the onslaught of a powerful blender right here.

Blendtec manufactures some serious and mean blenders, be it for your home-based kitchen or industrial usage, and in the past they have demonstrated to have literally grounded the iPhone 6 Plus and the Galaxy Note 3 down to a powdery state. So it’s evident what the chances of an Apple Watch are once Tom Dickson has had his way with it. 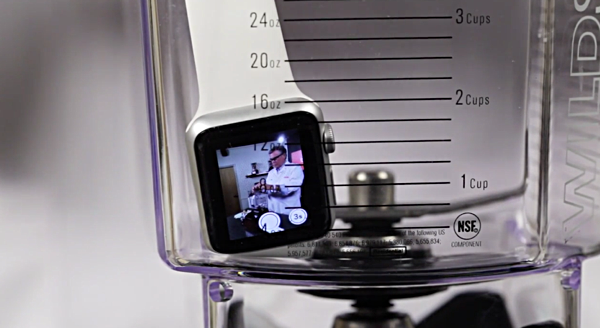 The choice of model here is the aluminum Apple Watch Sport with a white sport band. Building up to the point where the blades start spinning, Dickson being his usual self is shown engaging in some rather corny talk with a nervous Siri. It’s not too long before the blender rips apart the Apple Watch and in a few more seconds the device is literally gone and dusted. Dickson then slyly takes a jab at Apple’s purported car project: “I hear, Apple is building their own car … I can deal with that.”

The Apple Watch has been known to be short on availability for now, but that is not stopping torture, drop, durability tests from being performed on the company’s first wearable. Just a day back, we saw the Apple Watch Sport being put through a series of could-be kitchen accidents, followed by a 3-feet face down drop test video, where the results were pretty surprising to be honest.

While the Apple Watch is unlikely to sustain some overenthusiastic abuse, the device did demonstrate some remarkable splash and water resistant capabilities. It’s not clear if the watch will survive the depths of a lake, but it did manage to survive being submerged in a swimming pool.

As Apple Watch heads out to consumers, some early adopters of the stainless-steel built Apple Watch are complaining about some scuffs and scratches appearing on the watch’s case, though apparently that’s nothing some good ol’ metal polish can’t tackle.