The Apple Watch is largely believed to be the dominating smart watch in the market and now a new report by Strategy Analytics has further backed that point up.

According to the report the Apple Watch accounted for almost half of all the smart watches that were shipped in the second quarter of 2019.

Those Apple shipments are said to equal 5.7 million units worldwide, making up around 46% of the overall marketshare. That makes it the number one smart watch and by some margin, too. In fact, the next manufacturer to come close is Samsung with just 15.9% of the market.

Apple shipped 5.7 million smartwatches worldwide in Q2 2019, rising an above-average 50 percent from 3.8 million in Q2 2018. Apple Watch remains a long way ahead of the chasing pack and its global smartwatch marketshare has grown to 46 percent this quarter, up from 44 percent a year ago. Apple Watch has fended off strong competition from hungry rivals like Fitbit. Apple remains the clear smartwatch market leader.

The total number of smartwatches that shipped in the quarter comes to 12.3 million. 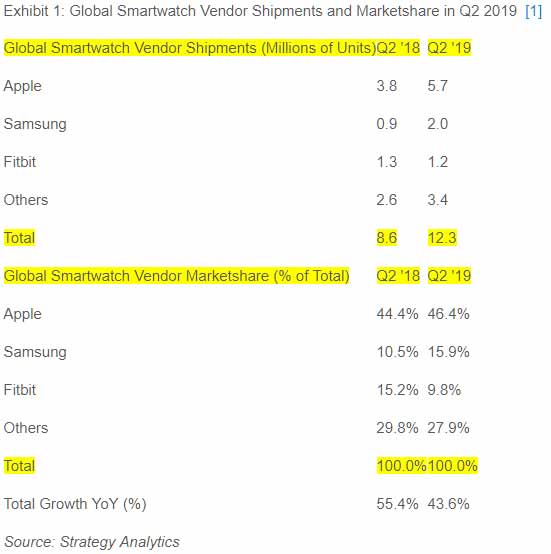 Apple continues to see growth in Apple Watch sales, assuming these figures are correct. The company doesn’t share specifics when it comes to Apple Watch numbers, instead choosing to lump it in with AirPods and accessories. Even the HomePod is included in Apple’s sales figures, although we doubt that accounts for too many of the overall number.

Apple CEO TimCook recently noted that the company’s wearables growth was “absolute blowout,” which we have to imagine is pretty good. In fact, growth was said to have been more than 50%.