Apple Watch Being Showcased In App Store Ahead Of Launch

Apple’s Spring forward media event is just a few hours away and all the finishing touches are being put in place for what is set to be quite the eye opening event. With new Apple Watch information and a possible new MacBook Air on the horizon, interest in the event is high.

With the Apple Watch in particular capturing the imagination, Apple is getting ready to make the expected Apple Watch companion app available to users with the iOS 8.2 update. Right now though, before Apple flicks that big switch that makes things live, searching the App Store for ‘Apple Watch’ now gives a result that shows a nice picture of the device along with a link that takes users to the Apple Watch segment of the company’s website.

The companion app that we all expect Apple to launch when the Apple Watch goes on sale will likely allow the configuration of the watch using an iPhone or iPad as well as managing the data that the health-related sensors are capable of collecting. We would expect the app to also manage how notifications are shared between devices so as to allow users to control which show up on the Apple Watch and which do not. 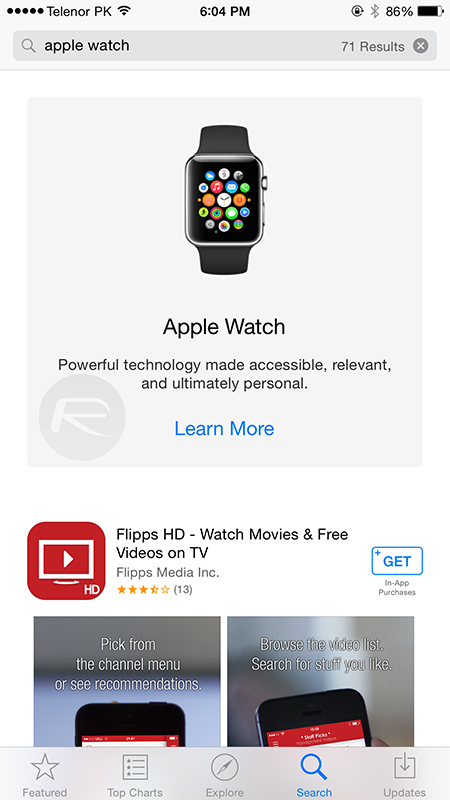 Apple is also expected to launch a dedicated App Store section for Apple Watch based apps, to make things easier for those in ownership of the company’s new wearable.

The Apple Watch is expected to go on sale within weeks, and with Apple believed to be on the verge of answering the all-important question of price points come event time, all eyes are on Tim Cook and his team. There has been much discussion about just how much people will need to spend to get the Apple Watch they want, so we can’t wait to finally put all the guesswork to bed.

Roll on 10am PT – we’ll be reporting all the big news as it happens.