We’re just days away from this year’s Apple Worldwide Developers Conference and as usual the rumor-mill is in full swing. Apple has already confirmed iOS 5 and Mac OS X Lion will be shown off at the event’s keynote address, along with the much anticipated iCloud service, whatever that may turn out to be. But now we have a whole new rumor, and we like it. We like it a lot!

Those of you keeping abreast of all things Twitter will know the company is widely expected to launch its own photo service in the vain of TwitPic and yFrog. The thinking here is that Twitter wants to do to the photo uploading aspect of the social network what it did to the third-party app space – launch its own version and make it the de facto standard. Twitter wants to own all facets of its business, and photos are fast becoming a major part of what people like to use Twitter for.

But what’s this got to do with WWDC, you ask? Well, this is where it gets exciting.

TechCrunch is today reporting that they have heard from their sources that Apple will be a major partner with Twitter going forward, with the new photo service being integral to that partnership. The claim is that iOS 5 (yup, the same iOS 5 we’re going to hear all about at WWDC) will feature its very own Twitter photo uploading integration straight from the current sharing menu inside Photos.app in a similar way to how we email and send to MobileMe.

We’ve heard from multiple sources that Twitter is likely to have a big-time partner for such a service: Apple. Specifically, we’re hearing that Apple’s new iOS 5 will come with an option to share images to Twitter baked into the OS. This would be similar to the way you can currently share videos on YouTube with one click in iOS. Obviously, a user would have to enable this feature by logging in with their Twitter credentials in iOS. There would then be a “Send to Twitter” option for pictures stored on your device. 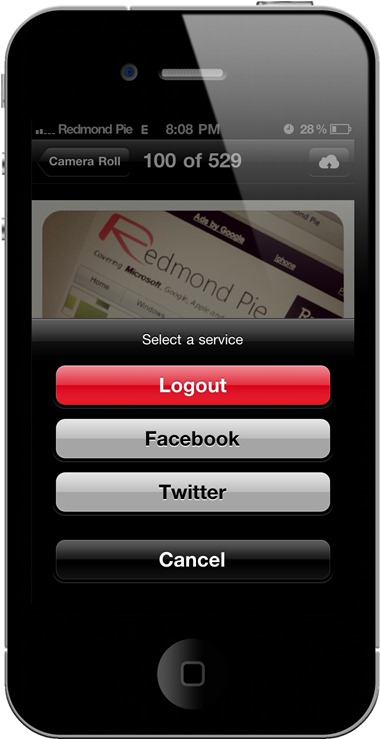 There have been rumors of a similar integration with Facebook over the years, and we wouldn’t be surprised to see that appear at the same time too.

While we like the idea of being able to throw photos straight into our Twitter streams from inside the Photos app, that’s not why we’re excited. DaringFireball’s John Gruber, all-round clever guy and clearly a man with more sources than Heinz has a further message to add to the concoction of rumors and myth.

So close to the bigger story, but yet so far. Imagine what else the system could provide if your Twitter account was a system-level service.

Reading those two sentences leads us to believe such loveliness as Twitter contact syncing could also be coming to iOS, as that would obviously need Twitter  integration at a system and OS level. Other than that we’re not sure what to expect – we’re sure the boys from Cupertino have got something up their sleeves, and here’s hoping we get a beta to play with once they share it with us next week!