If you find yourself in desperate need of a new charging cable for your iPhone then you may be able to get one delivered right to you door in a matter of hours and sometimes even quicker after Apple started offering same-day delivery through Postmates.

Assuming you live in the right part of the United States, the Apple Store is now offering a same-day delivery option for items such as Lightning cables and, oddly, Apple TVs though you won’t be able to get a brand new Mac Pro shipped using the service. That service is offered by Postmates and is apparently brand new as of today. Reports of items arriving hours ahead of schedule are not uncommon, though it is as yet unclear just where you need to be in order to take advantage of the new, super speedy delivery.

At the time of writing Postmates offers its service in San Francisco, New York, Los Angeles, Chicago, Washington DC, Seattle, Boston, Philadelphia, Miami, Atlanta, Denver, San Diego, Orange County, Portland, Phoenix, Austin, Houston, Dallas, San Antonio, Minneapolis, and Charlotte. We’ve tested to see if it’s available in San Francisco and Phoenix, but not all of those are currently live for Apple Store deliveries. We suspect the proximity to an Apple Store is the key here. so it’s worth giving same-day delivery a try if it’s something available to you. Hopefully Apple will be rolling the service out further afield in due course.

According to Apple’s own Apple Store app – on which the new delivery option is currently available – we’re seeing a maximum delivery time of four hours before the item is shipped, but going through different social media outlets reveals that orders are arriving much sooner than that. In some cases, an order placed arrived in just 40 or so odd minutes, which is extremely brilliant if you’re asking us. Why? Who wants to drive to an Apple Store just to pick up a cable right? 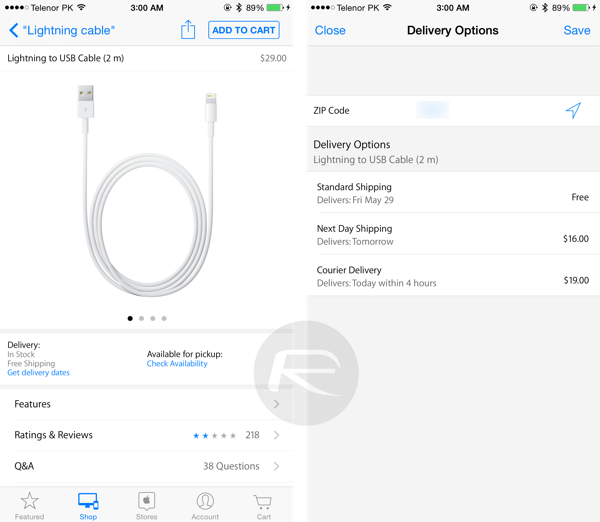 With the likes of Amazon also offering same-day delivery in certain parts of the country, Apple’s move into the arena perhaps shouldn’t be too big of a surprise. We’d like to see the number of items available for the new delivery option increase, but it’s still very early days.

We just wish we could try it out ourselves. Make it so, Mr. Cook. Make it so.