There is currently no hard opening date for the store and work to get the store ready for what is sure to be an expectant customer base is still ongoing: “We’re getting ready for our newest store in UAE by celebrating local artists and entrepreneurs. Excited for Apple Dubai Mall!”.

Apple has confirmed that it hopes to be able to share an opening date with everyone soon. It is also understood that the new store will be located in an area that is known for having extremely high footfall, with around 92 million visitors reported to have attended the area in 2015. The store itself will cover two whole floors in the mall and will be open seven days a week.

Apple’s newest U.A.E. store will be the third Apple Store to open in the UAE since late 2015.  That was the year in which Apple opened stores at the Mall of the Emirates in Dubai and another mall in Abu Dhabi.

Apple’s new Chicago River store in the United States is still in the works as well, with new photos and renders of the store being released. The store is expected to be ready for the public soon, and Apple already opened three new stores in the month of March alone with one being at a new spot in Miami.

Apple continues its aggressive opening schedule for new stores in an attempt to ensure that nobody lives too far away from an Apple Store. Apple’s retail stores are its crown jewel, and CEO Tim Cook and retail SVP Angela Ahrendts clearly intend to make the most of it. 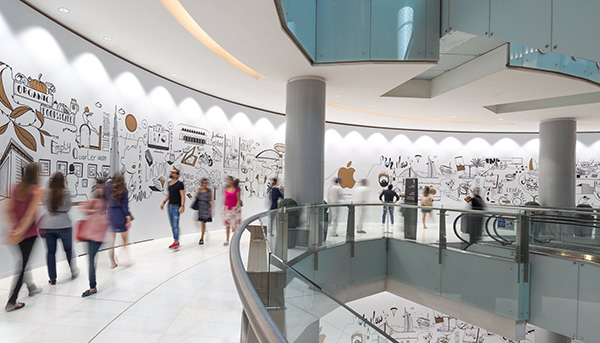