Apple Stops Signing iOS 9.3.1, Here’s What You Need To Know

So the inevitable has happened. After releasing final version of iOS 9.3.2 back in May last month, and now after almost a month of its availability to general public, Apple has stopped signing the previous iOS 9.3.1 firmware, making iOS 9.3.2 the only firmware version iOS users can upgrade to.

What this also means is that you can no longer downgrade or upgrade your iPhone, iPad or iPod touch to iOS 9.3.1 from any other firmware version. 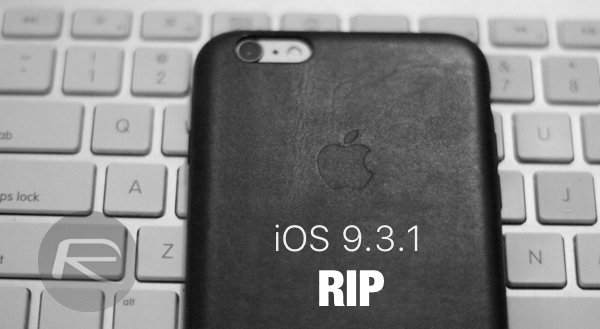 Now normally Apple doesn’t take this long to stop signing older firmware after the availability of a newer firmware version. But since the initial version of iOS 9.3.2 was botched with problems, especially for those with 9.7-inch iPad Pro devices, Apple continued signing iOS 9.3.1 to allow affected devices to downgrade to the older firmware version until a fix was made available for all devices on iOS 9.3.2.

Early this month, Apple re-released iOS 9.3.2 carrying build number 13F72 for 9.7-inch iPad Pro with a fix in place for error 56 bricking issue. And now after over a week of availability of iOS 9.3.2 build 13F72 and with no other issues being reported on the latest firmware, Apple no longer deems it necessary to keep signing the older firmware version, hence the signing window for iOS 9.3.1 has now been closed, and as mentioned earlier, that has killed any possibility of downgrading or upgrading to the older firmware version.

As always, we’ll keep you updated on any progress made on the jailbreak front whenever we get to hear more on it. Stay tuned.