Apple’s vision for a self-driving car and how it will offer it is something that has been the topic of much discussion and many, many rumors for years now. In fact, it is only outdone by the claims that Apple is building its own television, which, thankfully, seem to have finally died.

However, that self-driving car idea is bubbling along just fine and a new related patent application by the company refers to “intent signals,” something that would theoretically allow a car to know where a person wants to go and then take them there as a result.

One method would be for the car’s rider to use an indirect steering wheel, or perhaps a joystick of some sort, with the software then maneuvering the car based on those inputs. However, the patent instead focuses on indirect methods such as the owner instructing a car to go to a specific store. This would trigger the car to take the owner there and then request further guidance upon its arrival.

For example, if the individual states “I’d like to buy some plants for my garden” in the vicinity of a large retail store, the navigation manager may determine that the vehicle should preferably be parked near an entrance marked “gardening” or “gardening supplies”.

Building on this, the patent also makes provisions for a user to point at a parking spot and have the car do the hard work. This would require the user to have their phone in their hand so sensors like the accelerometer can be used to work out where a user is pointing with object recognition also using things like landmarks in order to pinpoint a location. The car would then ask for clarification if required. 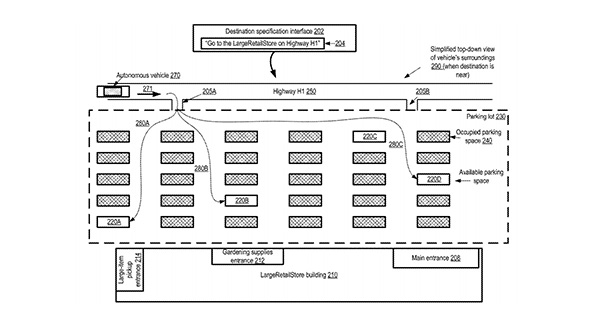 The patent also covers some sort of interface that would allow users to select specific locations from drop-down menus, should such an input be required, although we would hope that by the time we have self-driving cars, Siri would be able to understand basic instructions much more readily than it can now.