Cupertino-based Apple Inc. has recently filed a patent for Managing Real-Time Handwriting Recognition, which suggests that the company could be thinking about bringing a handwriting input feature to iPhone or iPad in the future.

The patent itself seems to suggest that Apple wants to design and develop a new method of text input for its devices, which, in this instance, would take the form of handwriting directly onto the screen of the iPhone or iPad, either with a finger, or a stylus, such as the $99.00 Apple Pencil.

This would mean that iPhone and iPad owners wouldn’t need to type on a virtual keyboard on a small iPhone screen, or struggle with the type experience whilst trying to hold a gigantic 12.9-inch iPad Pro. Handwriting is a method of input which is natural to all of us so it makes perfect sense for Apple to try and devise a way to integrate this into its mobile devices.

However, this is an area that Apple has already investigated, albeit decades ago and with a very rudimentary handheld device that was subsequently discontinued due to poor sales and poor performance. You have to imagine that Apple’s capability to deliver such a technology has progressed significantly in the time that has followed.

A technology like this would likely appeal to a large section of iPhone and iPad owners who would love the ease of being able to communicate through handwriting. However, it seems that Apple has the Chinese market in mind with the patent application specifically mentioning “real-time, stroke-order and stroke-direction independent handwriting recognition is provided for multi-character, or sentence level Chinese handwriting recognition.”

Because of the structure of the Chinese language, and because it literally requires thousands of logograms to make up the language, being able to write a logogram on the screen with a finger or stylus and have it recognized by the device would definitely make entering Chinese a lot easier and quicker. And, of course, as we know, the Chinese market is extremely lucrative for any business, not just Apple. Like with most patent filings, there is a good chance that this could lead to nothing or be used in Apple’s products elsewhere. 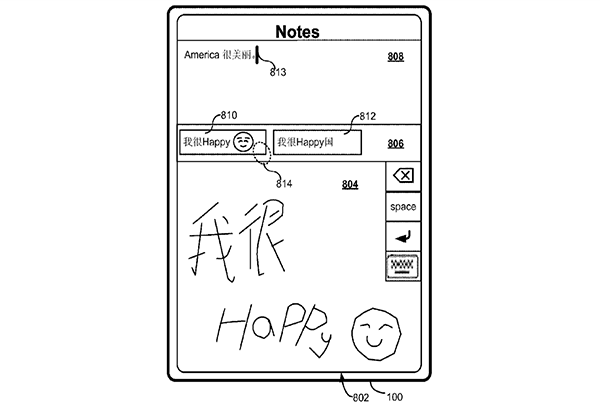