Although we don’t believe that the current Apple versus Samsung trial is a good thing for the technology world, it certainly does make up for an interesting watch from the outside and allows us to get an insight into the inner workings and design strategies of both companies. Certain statements and depositions from those giving evidence in the case are providing us with what would otherwise be a pretty much impossible look into the early design decisions that centered around the development of the iPhone.

The latest little nuggets of information to make itself known thanks to the trial is the fact that Apple diced with the idea of utilizing curved and shaped glass in the iPhone in an attempt to not only make it extremely stylish, but to also come up with a shape that dramatically minimized the risk of damage if the user dropped it onto a hard surface. Although prototypes of the curved glass iPhone were made – in fact internal prototype number 0355 refers to this – it was ultimately decided that the manufacturing costs of the two shaped pieces of toughened glass were just to high. 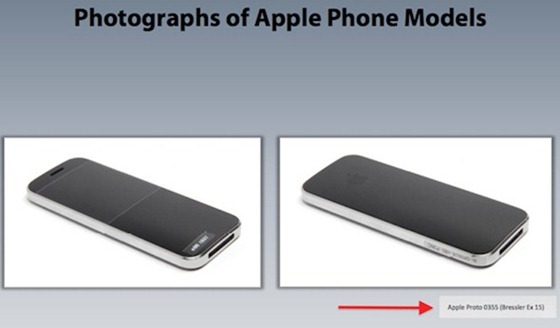 Douglas Satzger, who is now an employee over at Intel, but previously worked for Apple for twelve years, is one of the former Apple design team members who has been asked to shed his knowledge and expertise during the case. He confirmed that the curved glass design was one of the manufacturing avenues which the company was looking to go down on, but there were various issues with the created prototype which forced Apple to ultimately move in a different direction and produce the original iPhone which we were introduced to in 2007:

During the course of the trial we have seen a number of prototype designs which Apple iterated through before ultimately settling on the final production model, but keeping all of those in mind, this curved creation is definitely one that resonates most with me as an iPhone user. The current form factor of the iPhone is a beautiful creation and a great example of form and function, but I would still love to see Apple introduce a curved glass version of the iPhone in the future.