It is always a nice and refreshing change to see new designers, developers and manufacturers putting their brains into gear in an attempt to invent and produce a product that doesn’t conform to normality and isn’t just a blatant copy of something that is already out in the marketplace. Thankfully, that is exactly what Ballantine has done by introducing the world their wearable and programmable t-shirt that comes with an engaging built-in display that takes pride of the place on the stylish garment.

Ballantine is calling the product tShirtOS, and take it from me, it looks pretty awesome. The advanced t-shirt is the brain-child product of a partnership between Ballantine, producers of fine scotch whiskey, and CuteCircuit who are a clothing company based in London who design futuristic and interactive clothing. The idea of wearable electronics is nothing new, with a lot of the world’s largest technology companies dicing with the idea at one point in their history, but tShirtOS is a great example of what can be achieved in that sector. 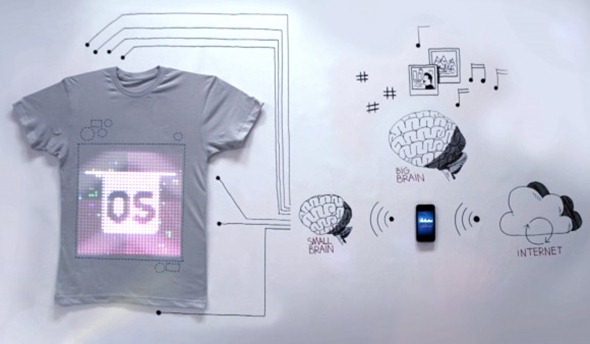 First and foremost, you should understand that the t-shirt itself is made out of 100% fine cotton, so there should be no worries about inferior cloth quality or it resizing after a wash. If the intricacies of the cloth doesn’t particularly interest you, then the built-in display that interacts with an iPhone may just be right up your street. The garment has an embedded microprocessor that can connect wire-free to a downloaded iOS app, which in turn can send information directly to the t-shirt. It really does sound like a fat fetched creation from a James Bond movie.

So, what could the t-shirt and the display be used for other than looking swish in public? The screen could be perfect for showing off information pulled directly from Facebook, images from the user’s Instagram network or even recent Twitter updates. But wait, there’s more. tShirtOS actually has a camera included as part of the setup, with the creators making the rather bold claim that it is the smallest camera in the world. As you would expect, a camera that small embedded in a wearable garment isn’t exactly going to be the best quality, but with the display only running at 32×32, it doesn’t really matter.

It actually seems rather staggering, considering when you look at the t-shirt itself, it appears to be just like any other, but it also has Bluetooth support, a built-in accelerometer and USB support for attaching additional peripherals. The official Facebook page allows users to sign up to request ongoing information about the product, but unfortunately at this present moment, the tShirtOS project is nothing more than an extremely expensive concept item.