There are a number of different ways that an Apple product can leak ahead of its official leak, and appearing in the Eurasian Economic Commission database is one of them.

Today, no fewer than seven new Apple notebooks appeared in that database, according to MacRumors.

What those new Macs are is up for debate. The 12-inch MacBook is most certainly due a refresh, but most of the attention right now is on the redesigned MacBook Pro that is expected to ship with a 16-inch display. Some had wondered if we would see that product announced during the recent WWDC event, but with refreshed MacBook Pro notebooks haven’t just arrived it was always unlikely.

If these new machines are the new 16-inch MacBook Pro then we would expect a song and dance to be made of their announcement. That would rule out a simple press release, and Apple has previously held Mac events in October – shortly after shipping new iPhones. 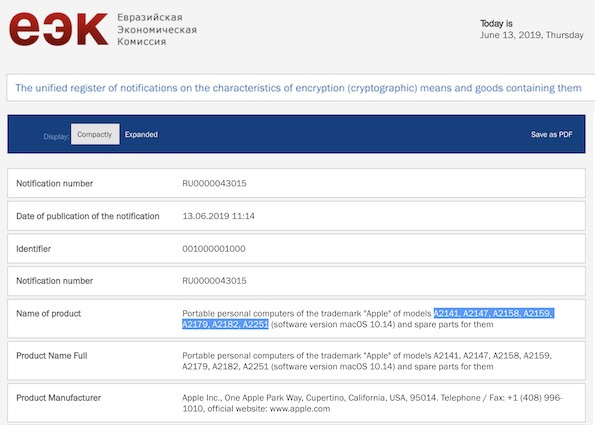 This wouldn’t be the first time that an EEC filing has outed an Apple product. We’ve seen similar goings on with iPhones, iPads, and other Macs in recent years, too. Wireless products must be registered with the EEC in order to be sold in Russia and a number of other countries, so anything that appears in the database is definitely on the horizon.