One of the great things about Apple, and one of the main reasons why so many people love the company the world over, is the service that they provide to their customers. Apple is often praised for the great products which they provide, which is a compliment they are indeed worthy of, but the truth is that a lot of technology companies manufacture exceptional products which are equal in functionality to Apple’s. The thing which generally sets Apple apart is the way they go about marketing those products, and the service they provide through after sales channels, designed to breed consumer loyalty.

One example of this great service and giving back to consumers, is the competition they hold for milestone downloads of the official Application Store. We seen it at the beginning of 2011 when the App Store was fast approaching the ten billionth download, and we have seen it again the last couple of weeks to celebrate the fact that the twenty fifth billionth application has been downloaded in the last four years. The company doesn’t need to hold the competition, the App Store would continue to thrive without the offer of a $10,000 iTunes gift card every ten or fifteen billion downloads, but the fact that they do, resonates with customers and paints the company in a positive light. With the 25 billionth application download in mind, Apple have today released the details of the very lucky App Store user who managed to pick the perfect timing and be the one who downloaded the milestone application. The milestone was reached on Friday evening, with the world waiting to see who the winner was over the weekend. Chunli Fu Qindao of China has been named as the lucky contest winner and will receive a mammoth gift card to the tune of $10,000 to spend across the iTunes Store. Apple has also revealed that Chunli Fu won the prize by downloading the ‘Where’s My Water? Free’ application, meaning that no financial outlay was used to win the prize – a double win in my eyes. 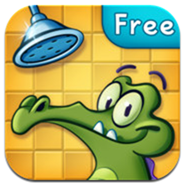 It goes without saying that the Where’s My Water application will see a huge spike in downloads thanks to the publicity of the competition. Apple has also taken the opportunity to blow their own trumpet, announcing that there are over 315 million iPod touch, iPad and iPhone devices running the iOS software worldwide. A statement from Eddy Cue, Apple’s Senior Vice President of Internet Software and Services said:

We’d like to thank our customers and developers for helping us achieve this historic milestone of 25 billion apps downloaded. When we launched the App Store less than four years ago, we never imagined that mobile apps would become the phenomenon they have, or that developers would create such an incredible selection of apps for iOS users.

With the total number of iOS powered devices hitting 315 million, and that figure set to rise with the imminent release of the next-generation iPad, the future of the world’s largest application hub looks very rosy indeed.