They grow up so fast!  It doesn’t seem five minutes since the iTunes App Store was launched, but it just hit the 10 BILLION download mark Apple announced via press release.  That’s one impressive number! 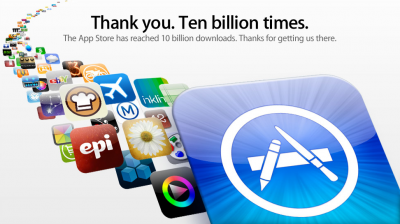 Apple’s online sale counter ticked over the magic number earlier today, and one lucky punter has scooped a $10,000 iTunes voucher. The lucky app-fiend is Gail Davis of Orpington, UK after she downloaded Paper Glider. Just think how many apps you could download with $10,000!

CUPERTINO, California—January 22, 2011—Apple® today announced that more than 10 billion apps have been downloaded from its revolutionary App Store℠ by the more than 160 million iPhone®, iPod touch® and iPad™ users worldwide. The 10 billionth app downloaded, Paper Glider, was purchased by Gail Davis of Orpington, Kent, UK. As the winner of the App Store Countdown to 10 Billion Apps, Gail Davis will receive a $10,000 iTunes® Gift Card.

“With more than 10 billion apps downloaded in just two and a half years—a staggering seven billion apps in the last year alone—the App Store has surpassed our wildest dreams,” said Philip Schiller, Apple’s senior vice president of Worldwide Product Marketing. “The App Store has revolutionized how software is created, distributed, discovered and sold. While others try to copy the App Store, it continues to offer developers and customers the most innovative experience on the planet.”

The revolutionary App Store offers more than 350,000 apps to iPhone, iPod touch and iPad users in 90 countries around the world, with more than 60,000 native iPad apps available. App Store customers can choose from an incredible range of apps in 20 categories, including games, business, news, sports, health, reference and travel.

As Engadget points out, 10 billion is more downloads than this planet of ours has humans. Just think about that for a minute and tell me it isn’t mind-boggling!