If you have nightmares about Amazon taking over the world with a fleet of self-driving delivery trucks and drones, then look away now because the company is making further moves to speed up its delivery times, though this latest effort doesn’t require the use of robots. It does involve flying, though.

Amazon has announced its plan to show off the Amazon One, its first Prime-branded cargo plane, at the Seattle SeaFair Air Show. The plane, which is a giant Boeing 767-300 operated by Atlas Air, is the first of many planes that will make up Amazon’s new Prime Air cargo operations. Amazon will lease 40 planes in total from Atlas Air and ATSG, another of its partners. 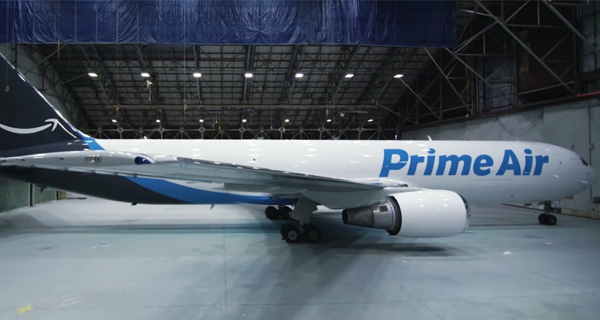 The move is designed solely to decrease delivery times for a customer-base that is constantly demanding ever quicker ways of Amazon getting products from its storage depots to their doors.

Amazon Prime Now is now part of that process, allowing shoppers to get products within two hours depending on location, and this new initiative will allow Amazon to keep its distribution centres well stocked in order to make things like Prime Now possible. Just don’t expect one of these new planes to be landing outside your house to deliver your new phone charger!

This is one of many steps Amazon has taken over the past few years to increase delivery speeds for its customers, with two examples being a network of 4000 trailers, and Amazon Flex – a mobile app that lets users start delivering for Amazon.

If the Amazon Prime Air announcement is just too exciting for you and you’re craving more, then Amazon has a timelapse video of the first plane being painted that we’re sure you would just love to see. It’s quite literally watching paint dry, though, so anyone expecting the greatest show on Earth should probably look elsewhere to avoid disappointment.