There doesn’t seem to be a shortage of big named companies that are prepared to jump on the wearable technology bandwagon. Samsung have recently hit the market with the Galaxy Gear smartwatch, a device that has so far failed to impress anyone. A number of other large brands are rumored to be planning on getting in on the action with their own wearable but the latest to come forward with real intent is Adidas, one of the world’s biggest manufacturers of sports clothing and accessories.

The release of the smartwatch will mean that Germany based Adidas will be joining ranks and rubbing shoulders with the likes of Nike, Pebble, Samsung and most recently Sony. The official announcement was made to the public during today’s GigaOM Mobilize conference in San Francisco where it was announced that the device will hit the market for a wallet bursting $399. As you might imagine, an intelligent time-piece from a company like Adidas is intended for fitness conscious individuals and will be specifically tailored toward runners.

It seems that Adidas have put a lot of emphasis on the fitness side of things with the stylish looking device. The watch will sport a full color touchscreen, and will be capable of tracking a number of different things such as the location, speed and heart-rate of the athlete who is wearing the device through a number of built in sensors like GPS, Bluetooth, WiFi and accelerometer. This alone should allow it to more than compete with various other fitness based wearables such as the Nike+ FuelBand and the Fitbit Flex; albeit at a much inflated retail price. In addition to the tracking functionality the $399 piece of kit will also offer coaching advice through the interface or connected headphones.

Although there will be a lot of individuals who are immediately put off by the high price, it does seem like a lot of thought and design has gone into this surprise product. Wearers of the device will also be able to listen to music on the go that can be loaded onto the storage on the device and it’s also been confirmed that the device will not require a smartphone to be connected to make use of the features. The limitations of competing devices like the Samsung Galaxy Gear is that they are rendered almost entire feature-less without a Samsung based smartphone to work in conjunction with it. 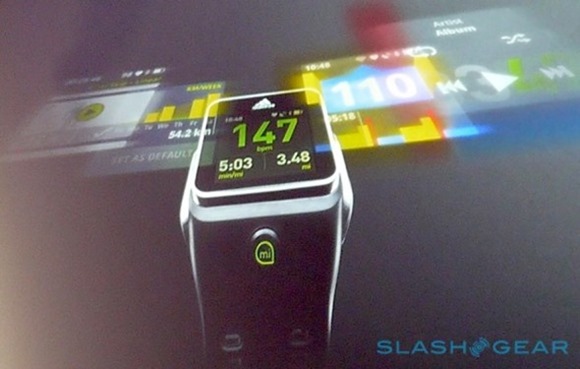 The device will be hitting shelves on November 1st, which is just in time to compete with the new Nike+ FuelBand SE and will retail for $399.