The response that Apple has got for the new iPhone 4 has far outstretched their supply chain. Apple today has issued a statement in which they have stated that more than 600,000 iPhone 4s have been pre-ordered through Apple and its carrier partners yesterday. According to reps at AT&T, this is ten times as many orders as they took for the iPhone 3GS last year. 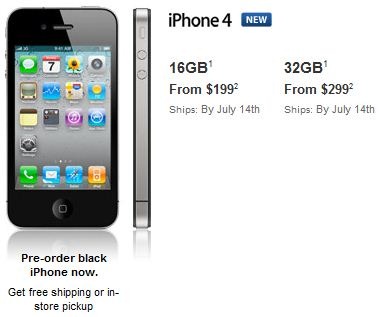 The full statement from Apple is as follows.

Yesterday Apple and its carrier partners took pre-orders for more than 600,000 of Apple’s new iPhone 4. It was the largest number of pre-orders Apple has ever taken in a single day and was far higher than we anticipated, resulting in many order and approval system malfunctions. Many customers were turned away or abandoned the process in frustration. We apologize to everyone who encountered difficulties, and hope that they will try again or visit an Apple or carrier store once the iPhone 4 is in stock.

If you haven’t ordered yours up till now, you are out of luck for almost a month as online Apple Store in US now suggests July 14th as the new shipping date for iPhone 4. Have you pre-ordered yours yet? [via Engadget and Gizmodo]