It is strongly suspected that the next-generation iPhone, unofficially dubbed the “iPhone 6” for obvious reasons, will sport a larger, 4.7-inch display. Various case leaks, analyst reports and concept designs have turned this notion into mainstream consensus, and with a fairly solid idea of what a display increase may do to the form factor of the Apple smartphone, how does it stand up against some of the more sizeable flagship Android handsets currently available?

A MacRumors forum member has answered this very question by creating a virtual line-up of smartphones – including the Galaxy S5 from Samsung and HTC’s One M8 – to see how the 4.7-inch iPhone 6 compares in terms of size and overall design.

Of course, since we only have a guideline based on speculation of what shape the iPhone 6 will eventually take, we can’t yet read too much into this, but it’s certainly intriguing to see – for the first time – an Apple handset that isn’t completely dwarfed by its peers.

Up until the iPhone 5 arrived toward the back end of 2012, every iPhone from 2007 onwards included a display of 3.5 inches in diameter. But while this was fine through the first couple of generations, Android vendors continued to increase the amount of real estate, and it was somewhat inevitable that Tim Cook’s company would eventually buckle.

Despite making the display longer to its current 4.0-inch duration, the latest iPhone 5s cuts a meager figure against the major names in Android space, but if these renderings by MacRumors forum member deuxani are anything to go by, this won’t be the case for too much longer. 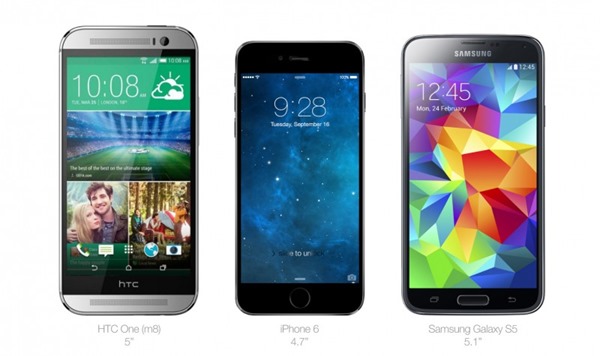 As well showing us how the 4.7-inch display will look versus the One M8 and Galaxy S5, there’s also a comparison with the likes of the Google-branded Nexus 5, the Moto X, LG G2 and its “mini” counterpart. 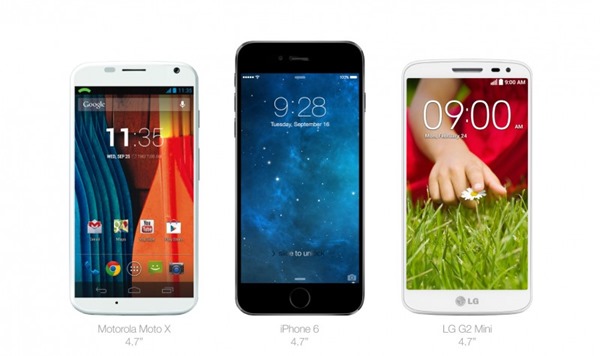 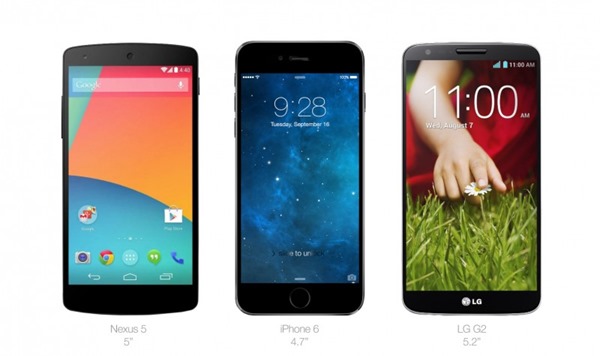 Even though, as you can see, it’s still slightly smaller than the flagship Samsung and HTC devices, it more than holds its own, and with the possibility of a 5.5-inch iPhone 6 arriving some time in the not-so-distant future, those wanting an iPhone experience without having to forgo a decent-sized display will not be disappointed.

What do you think – does the iPhone 6 need to compete with the size options of its rivals? Or is the iPhone 5s already the perfect size? Check out the renderings, and be sure to leave your comments below!