It really isn’t a big secret that the smartphone and tablet industry is an extremely competitive marketplace to be in. The iOS and Android operating systems are undoubtedly the two major players in this space, with Apple having sold more than 250 million iPhones in the last five years following the original launch and Google currently activating 1 million Android devices every day. The competition between the two platforms has always been a fierce one, but with Apple announcing their own mapping system in iOS 6 to rival the tried and tested Google Maps, the competition has ramped up another notch.

Before the official announcement of iOS 6 at this year’s Worldwide Developers Conference, it was widely speculated that Apple would be ditching Google Maps in favor of their own 3D maps creation. It was later on confirmed and showcased during the keynote presentation in San Francisco earlier this month. Google also used San Francisco as a base to announce a new version of Google Earth, taking it to version 7.0, which brings stunning 3D maps to Android smartphones and tablets, which quite honestly, competes head-on with Apple’s creation. 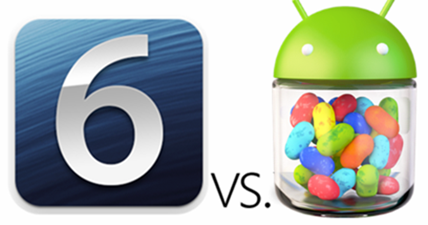 This can only be a good thing for consumers as the world’s two largest mobile operating systems now have 3D maps available on them, but iOS 6 users have to wait until fall to get their hands on it. The question in everyone’s mind right now is; Which one offers a better implementation? On one hand, Google Maps and Google Earth are tried and tested solutions that have been considered the de facto standard for a long time. And on the other hand, Apple is relatively new to the mapping game, but they have a history of producing excellent software and user experiences, so could their own Maps solution follow this trend?

Folks over at iPhoneItalia have put together a series of images comparing the two Maps offering in question. One of the first noticeable differences in the two solutions is the way in which 3D views and experiences are handled. Apple’s vector maps solution, available only when iOS 6 is launched later this year, has a built-in 3D button that lives at the bottom of the display on the native Maps app, whereas on Android, they are available via Google Earth app as opposed to the Google Maps app and can be activated by simply taping on the layers button, and then selecting “3D Buildings” to get to 3D maps view.

The comparison between the two can be seen in the images below: 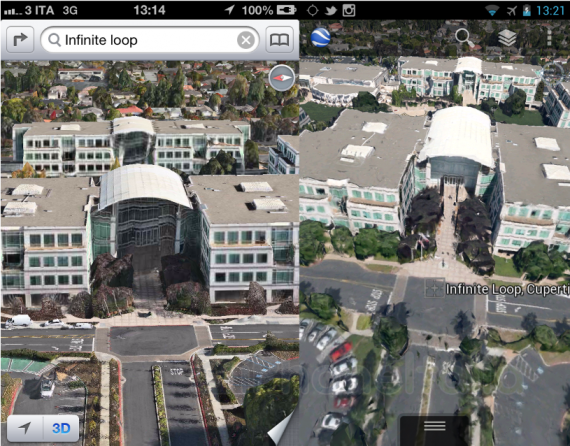 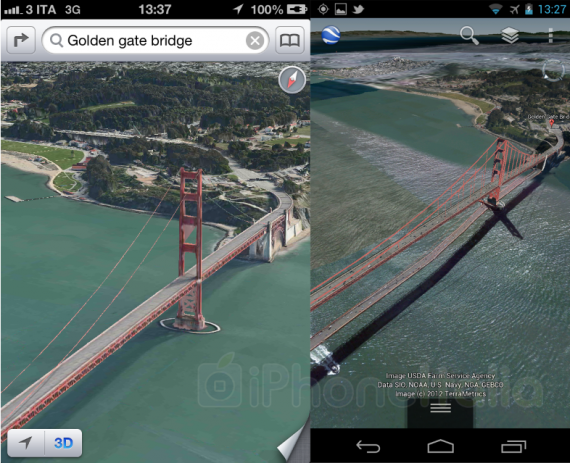 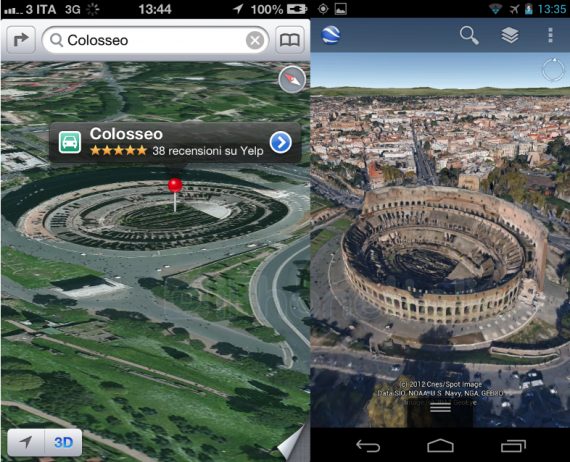 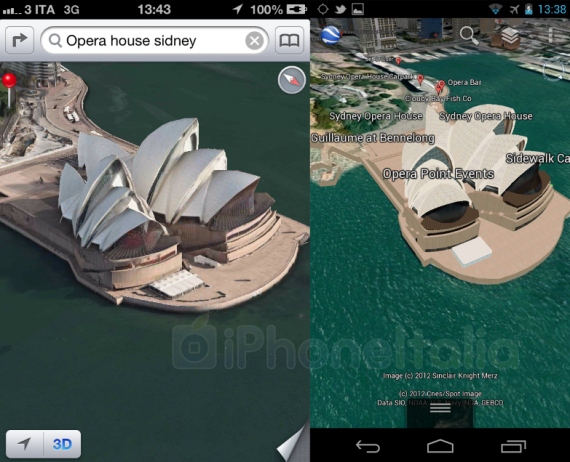 One thing which is worth nothing; Apple’s Maps offering is currently in an extremely early beta stage and won’t be ready for primetime use until the back end of this year with the release of new hardware, the new iPhone. Google has been working on Maps and Google Earth’s 3D options for a very long time, so a gulf is always expected.

(Thanks to Andrea for sending this in)