Here’s a comparison between iPhone 7 with 2GB RAM Vs iPhone 7 Plus with 3GB RAM, showing the difference between the two devices with regard to RAM and memory management. 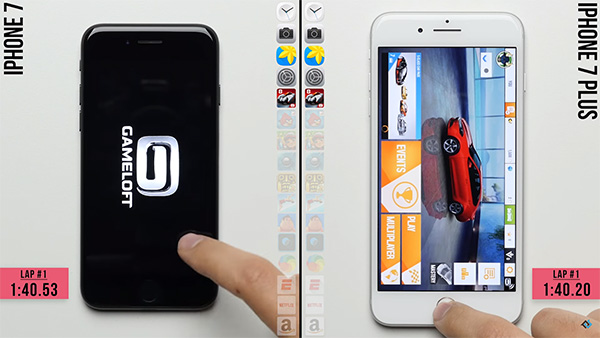 That has now changed with a video posted to YouTube comparing the two handsets in exactly this way. The video has both phones side-by-side, running through a predefined obstacle course of app and game loading. Each icon is tapped and the next is not launched until the app or game before it has fully loaded. It’s a simple speed test, but where things get interesting is on the second run through the list of apps. Which will require re-loading, and which will not?

Through the first run of app and game loads, both the iPhone 7 and iPhone 7 Plus are, of course, seen loading each from scratch, and there appears to be no difference between the two head-to-head even though the iPhone 7 Plus has higher resolution. Where things started to get interesting was the second run through the list, with the iPhone 7 having to reload data because it had been purged from memory. With the iPhone 7 Plus having more of that memory, it was able to keep more apps and games active, meaning they resumed from the state they were left in instead of loading all over again.

This kind of test is exactly where having more on-board RAM will come in handy, and one that highlights just why the iPhone 7 Plus may be the most powerful of the two Apple flagship devices launched last month. It makes for an interesting watch, so be sure to check it out.