It may have only been around for a few months but the Apple Watch this past week received a new software update which brings watchOS 2 to our wrists. With some big improvements to the Apple Watch thanks to native apps and less of a reliance on an iPhone for things like iMessage, one of the most requested features has also been added in the shape of third-party complications.

For those not familiar with the term, complications are little pieces of information that are shown on the selected watch face. That information could be your next calendar entry, the weather or the time in a different timezone, amongst other things. In its shipping state the Apple Watch wasn’t capable of displaying information presented by third-party apps, but with watchOS 2, that all changes. 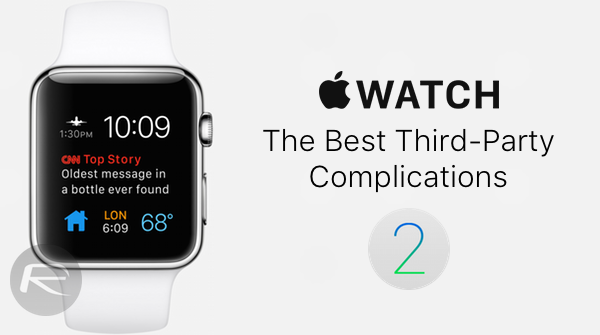 With developers now rushing to get their Apple Watch apps updated to include a complication, we’ve been on the lookout for those which caught our eye and we’ve come up with quite a hefty list. Here are some of the best Apple Watch apps that take advantage of watchOS 2’s third-party complication support.

The Weather Channel: while the stock Weather app on the Apple watch does a job, you can never have enough options when it comes to knowing when you’re going to get rained on.

OmniFocus 2: Arguably the best task management application on iOS, the Apple Watch app is now native, bringing with it a complication that allows users to see how many tasks they have left to complete.

Lifesum: Keeping track of your health is important, and doing it via the Apple Watch’s watch face is now possible thanks to the app’s own complication.

Dark Sky: Like all of the other weather apps, Dark Sky can tell you the weather for the current day, but it’s the app’s ability to know just when it will rain that makes it stand out. Have that information on your wrist, and your watch face, thanks to the app’s latest update.

WebMD: See your next scheduled medication on your watch face.

Sleep++: This app’s complication can tell you how long you’ve been asleep without ever having to open an app.

CARROT Weather: Because you just can never have enough apps that tell you how hot, cold or wet it’s going to be outside. Again, a complication that tells you just what you need to know.

Cycles: See how far through your period cycle you are without having to ever leave the comfort of the watch face.

DataMan Pro & DataMan Next: See just how much data you have used on your iPhone. Information on your wrist right when you need it.

Hotwire: Provides hotel deals and car rentals from nearby areas. The Apple Watch complication for this app lets you keep track of your trips right from the watch face.

Lose It!: Daily calorie counter right on the watch face.

Rules!: Basically a puzzle game for Apple Watch. The complication shows what stage you are in the game, along with your score and goals.

Currency+: Now you can see the time and the exchange rate at the same time!

Streaks: Sometimes sticking to a routine can be difficult, but with Streaks and its complication you’re never far away from your goals.

ETA: Now you can see your travel time from the watch face, meaning you should never be late again.

App in the Air: An app with support for a ton of airlines and boarding passes to track your flight information from the watch face.

Timecrest: Always stay up to date on the game, even when you don’t have time to open the app.

Cord: Messaging doesn’t get any faster than having a complication on your watch face.

The Weather Network: Another option should you really, really need to know what the weather is going to do in the future.

With developers constantly updating their apps, expect to see even more Apple Watch apps get new complications over the coming weeks.