We’re inching closer and closer to the unveiling of Apple’s 2019 iPhone lineup, and even though we’re still a few months away, we’re already starting to learn more and more.

We’ve seen a couple of leaks over the last couple of days, with the latest coming from Bloomberg’s Mark Gurman via Twitter.

The new leaks appear to show a photo of a trio of iPhone moulds all believed to represent the iPhone 11, iPhone 11 Max, and the replacement for the iPhone XR.

Notably, all three appear to sport the square camera module area despite the new iPhone XR only having two cameras rather than the three of its higher end cousins.

Moulds of this nature are often used by case and accessory makers to ensure that their own designs are where they need to be ahead of an iPhone’s launch. It’s these moulds that make it possible for case makers to have products ready so soon after an iPhone is announced, and they’re usually pretty accurate. The details for such moulds normally come from Foxconn or other Apple suppliers which also helps with their accuracy. 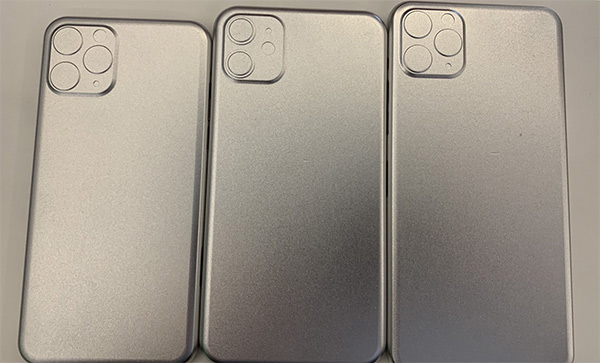 Ultimately these new moulds confirm something we’ve been expecting, and further adds fuel to a fire that OnLeaks stoked recently with a similar leak. Mostly, that means we can be pretty sure that the new iPhones will have that square camera configuration, something that will be quite the departure from the current iPhone lineup.

Apple is expected to announce its three new iPhones this September, and we’d also expect more leaks once the first betas of iOS 13 start to roll out next month, too.