Leaks come in all shapes and sizes and popular benchmarking app Geekbench has been known to be the source of such leaks in the past, especially when it comes to iPhones.

Now it looks like this may be the case once more with the 2018 iPhones possibly outed by the software.

Initially reported by Consomac, it would appear that at least one of the 2018 iPhones may see minor speed improvements over the current iPhone X. The device in question is listed as an “iPhone 11,2” with a D321AP motherboard. It’s possible, according to the report, that this is the iPhone 9 or iPhone 11, depending on which naming nomenclature you decide to go with.

The Geekbench score that might have given us our first glimpse of the new iPhone comes from last week and shows an ARM processor that is similar to the A11 Bionic chip that beats at the heart of every 2017 iPhone. Where things change though is in the RAM, with the newly tested device featuring 4GB of RAM whereas current iPhones top out at 3GB. Both the L1 Instruction Cache and Data Caches both see increases from 32KB to 128KB, too.

So how did the new device score? As far as single core results are concerned, the improvements were marginal, with just 10% speed improvements over the iPhone X. Things were even less impressive with the multi-core test, which saw an improvement of just 5%. However, it’s important to remember that this is an unreleased product and it’s possible that the hardware and indeed Geekbench itself are not yet optimized for testing. 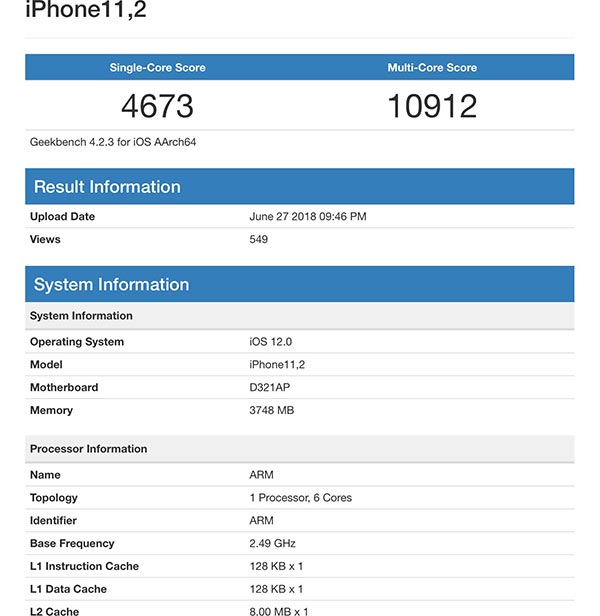 What all this boils down to is there needing to be a pinch of salt applied here. Given the iPhone 11,2 identifier, it is also possible that this device is the lower end of 2018’s iPhone announcements – hopefully the higher-end devices will fare better in testing.