As it currently stands, there is no official release schedule for the revamped Electra jailbreak experience for iOS 11.3.1. However, there is some news relating to its feature set. CoolStar, the main architect of the jailbreak, has announced that the solution will come equipped with what they are calling Project Repo-unclutter.

If you put aside the disappointment of not knowing when the jailbreak is going to drop, then you are actually left with an announcement that under normal circumstances would bring the roof down.

From the post and given description, we can ascertain that Project Repo-unclutter is a tool which will ship with the Electra iOS 11.3.1 jailbreak in order to immediately prevent device owners from seeing tweaks and packages which are not compatible with their device:

One of the surprises coming with the iOS 11.3.1 jailbreak is dropping early! Project Repo-unclutter! Packages from BigBoss/Modmyi/Zodttd will be filtered so only ones compatible with iOS 11 show up! Add your packages to mark them as compatible!

So, from that post, as well as the accompanying Google Docs sheet, we can ascertain that CoolStar and the team plan to let Electra ship with an internal database that will immediately filter out non-compatible tweaks and packages listed on default Cydia repositories in order to prevent device owners from installing tweaks that are instantly going to cause problems.

This is definitely a beacon of good news in absence of a jailbreak estimated-time-of-arrival.

The post also comes with an accompanying Google Docs spreadsheet that gives developers the chance to mark their packages and offerings as compatible with iOS 11.3.1. The average community member will be able to view the document and watch it grow over time but will only have read access rather than the ability to view and edit the content. It’s this document that will likely form the basis of the Project Repo-unclutter framework. Definitely, something for jailbreak fans to look forward to when Electra 11.3.1 jailbreak finally drops. 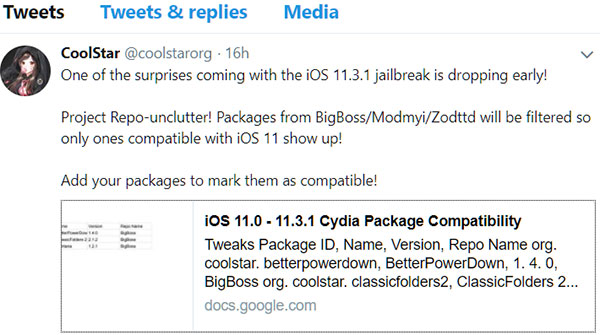 Talking of the jailbreak dropping, we don’t have a good indication of that yet. The team has recently confirmed that it is taking on the responsibility of improving the APFS rootfs remount and has now confirmed “one” of the Electra hidden surprises. As soon as we know more, you will know more.