Many analysts and forecasters have been suggesting that Apple’s iPhone X is a so-called “flop,” citing rumored poor global sales that had failed to meet pre-defined targets.

After Apple’s recent earnings call, we simply know that not to be true, but now, thanks to Strategy Analytics, we can get an understanding of just how much of a success iPhone X has been for Tim Cook’s company during 2018.

The analytics firm has not only confirmed that Apple had the world’s best-selling smartphone during Q1 2018 with iPhone X, but that the Cupertino-based company also secured the second and third spots with iPhone 8 and iPhone 8 Plus, respectively.

There may have been an accelerated amount of doom and gloom around Apple and iPhone over the last five months but it’s evident that the gloom is misplaced and that Apple’s iPhone range is still head and shoulders above the competition, as far as consumers go.

The good news goes even a little further where Apple is concerned as Strategy Analytics has also confirmed that Apple had the world’s best four devices in terms of the sheer number of units shipped and market share thanks to iPhone 7 still managing to hold its own in a highly competitive smartphone market. The well-received Xiaomi Redmi 5A and Samsung’s Galaxy S9 are sitting in the fifth and sixth spot, chasing iPhone 7 down in order to try and break the Apple stranglehold. In its recent earnings call, Apple announced that it had shipped 52.2 million iPhones during the first quarter of 2018, with iPhone X bragging the highest number of devices sold out of all iPhone models.

This is the second quarter running in which Apple’s flagship smartphone has found itself sitting at the top of the stack as the world’s most popular smartphone. A lot of that is down to Apple’s constant marketing machine pushing iPhone X through multiple channels, as well as the consumer love of the edge-to-edge design, the inclusion of Face ID thanks to the new TrueDepth camera system, and, of course, who could forget the whimsical Animoji functionality which allows device owners to thrust their voice and facial expressions onto a 3D animated character? 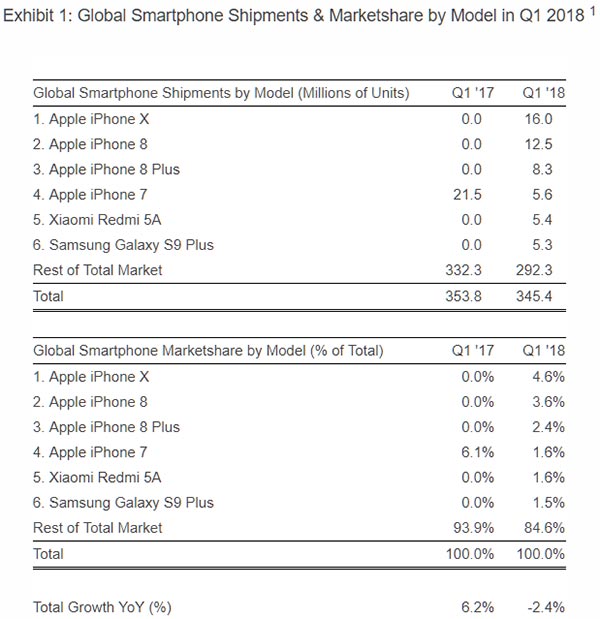 It will be extremely interesting to see how Apple’s devices fair during the current quarter.