Here’s specs comparison between Apple’s 2016 MacBook Pro with Touch Bar Vs Microsoft’s Surface Book 2 i7. Like any other comparative hardware, these two different machines have their advantages and disadvantages, but how do they compare when you put them together and compare specs-wise?

If we start with Microsoft’s second-generation Surface Book dubbed the Surface Book i7, then you are faced with a laptop that weighs approximately 3.5 pounds, has a varying size depending on whether or not it is attached or detached from its base, and ships running Microsoft’s own Windows 10 Pro. 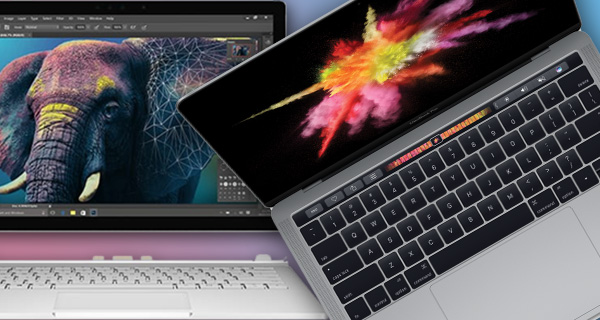 The machine ships with a stunning 13.5-inch PixelSense touch-screen display, complete with 10-point touch and a 3000-by-2000 pixel resolution at 267 pixels per inch. Performance wise, the Surface Pro is powered by a sixth-generation Intel Core i5 or i7 depending on the specification chosen, and can be accompanied by 8 or 16GB of RAM.

When considering Apple’s 2016 MacBook Pro, which was announced during today’s “hello again” event, you get either a 13 or 15-inch model that measures in at just 13.9mm thick and weights just 3 or 4 pounds depending on the screen size chosen. That MacBook, of course, comes pre-installed with Apple’s macOS Sierra, and is powered by the Intel’s sixth-generation quad-core Core i5 or i7, which once again is based on the variant and specification chosen. The MacBook Pro also features Apple’s brand new Touch Bar multi-touch Retina display above the main keyboard, complete with integrated Touch ID sensor and Secure Enclave embedded within the power button. However, the 13-inch entry-level model does not pack these new goodies.

Ports wise, Microsoft’s Surface Book i7 offers two USB 3.0 ports with a full-size SD card reader. There’s also a Surface Connect, headset jack and mini DisplayPort. Apple on the other hand has gone down the route of integrating four individual Thunderbolt 3 ports with USB-C connector that can be used for power, Thunderbolt, USB, DisplayPort, HDMI or VGA. On the 13-inch base model however, you only get 2 of these Thunderbolt 3 ports, but with a similar set of functions.

You can check out the detailed specs sheet for both the notebooks below:

So, which one would you rather pick? Sound off in the comments below.