All 2016 MacBook Pro Models Compared: Which Should You Get?

Here’s a specs comparison of 2016 MacBook Pro with Touch Bar and Touch ID Vs Without, and 13-inch Vs 15-inch models – all in one place.

We’ve been looking forward to Apple’s “hello again” event for quite some time now. In fact, we’ve been wanting this time to come long before the event was actually confirmed by Apple, partly because we were eager to see exactly what Apple had in store for the Mac. Also, any Apple event is usually packed full of interesting updates about the company’s products and services. This event may have been slightly underwhelming from a product and announcement perspective, but it did give an interesting insight into certain aspects of the company, and also raised a very important question: do you buy a 2016 MacBook Pro with or without that beautiful Retina Touch Bar and Touch ID?

Perhaps a slight recap is in order before proceeding. As part of today’s event, Apple not only announced a new MacBook Pro in 13-inch and 15-inch variants that come with a multi-touch panel that it’s calling the Touch Bar along with Touch ID, but there was also a 13-inch model that’s being classed as an entry-level version, which offers the same visuals and physical appeal, but comes without the Touch Bar and Touch ID and falls down in certain places from a specification perspective when stacked against the other models. So, which one do you go for?

In an ideal world, where money doesn’t matter, you would, of course, opt for one of the variants that sport the new Touch Bar and integrated Touch ID sensor. A closer matchup would be between the first two 13-inch variants in the lineup, but even the first base 13-inch model with Touch Bar and Touch ID is $300 more expensive than the entry-level 13-inch MacBook Pro that ships without both. Of course, as you might expect, there are also a number of other things to consider when deciding on the purchase route.

First of all, both machines offer the same supported scaled resolutions from a display perspective, and both offer a screen experience that services up 500 nits of brightness. Processor-wise, however, there is a little trade-off if you want to pay that $300 less for the entry-level version. That model ships with a standard dual-core Intel Core i5, clocked at 2.0GHz. The more performant $1799 model offers a 2.9GHz dual-core Intel Core i5. Both models come with 8GB of RAM, which can be bumped up to 16GB.

It’s actually a really interesting question that can only be answered by taking into consideration the exact use case of the machine. Those who are simply looking for something highly portable and more on par with the MacBook Air can instantly pocket that $300 for themselves. However, those who need to be on the cutting-edge, want to interact with that stunning Touch Bar, and need a bit more power for advanced photo or video editing, or even development, should likely look to grab the more high-end version in either 13 or 15-inch size depending on whichever they prefer.

If budget isn’t an issue, or you’re looking to go for the larger variants anyway, the first, basic comparison below should suffice. Those on a tighter spending limit should scroll further down for a second, more detailed comparison between the first two entries in the 13-inch lineup. 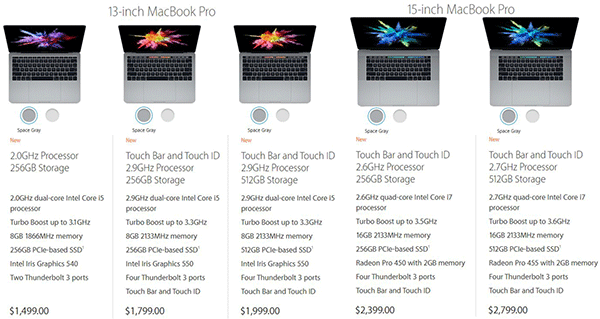