Anyone who uses their iPhone to frequently capture video or sound snippets will be more than aware of the limitations of the device. The iPhone 5 has had its fair share of haters due to the controversy surrounding the alleged purple haze appearing on photographs, but it’s also very hard to deny that video recording on the device is nothing short of stunning. Improving captured sound quality is definitely on the agenda for some people and the Zoom iQ5 audio attachment could certainly help with that.

It may not be the prettiest iPhone 5 attachment you will ever come across, or the most discrete, but the Zoom iQ5 should definitely go a long way to providing the captured audio quality that many people feel the iPhone deserves. The attachment itself will only be compatible with Apple’s latest iPhone out of the box, due to the fact that it comes with a 8-pin Lightning port connection outlet. Users could opt to use the hardware with a 30-pin to Lightning adaptor, but in all honesty; the setup would start to get a little messy then. 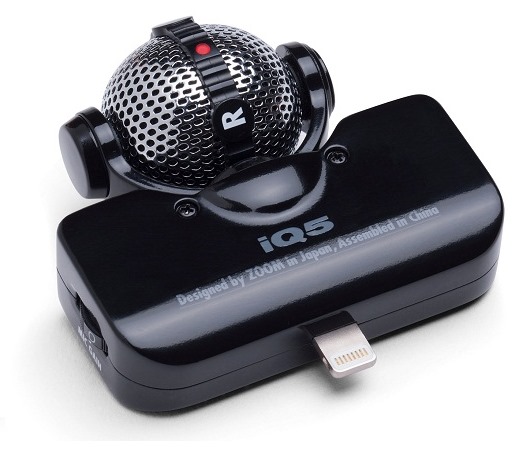 Zoom has also confirmed that the microphone attachment will only be compatible with iOS 6.0 and above. The main recording head of the portable iQ5 microphone is adjustable, allowing it to rotate seamlessly so that users can comfortably capture pro-quality audio in both portrait and landscape modes. The hardware will come with the ability to adjust recording functionality, to allow 90 and 120 degree fields of reception, something that should be particularly useful for those who intend to capture sound from large groups of people speaking.

When the iQ5 actually launches, it should also be capable of capturing RAW, uncompressed audio at a reported 16-bit 44.1 KHz. It all sounds mighty impressive, but the proof really will be in the pudding, so we can’t really judge until we manage to get our hands on one and give it the real-world test. Zoom has announced that the product won’t be available until later on in the year and should retail for around the $100 mark when it does get released.

Users of competing products from the likes of Blue Microphones will more than likely stick with what they know, but it would be nice to see multiple choices in the market for those who want higher quality audio on their captures.