You Can Now Play Apple Podcasts Online In Web Browser

Apple was the company that first gave podcasts their name, but since then it hasn’t really made them first class citizens on its platforms. That’s likely to start to change when the Mac receives its own Podcasts app later this year, and Apple has also now revamped its podcast web interface.

Previously, visiting a podcast via Apple’s web-based directory would show a list of episodes with a link to play them in iTunes.

That simply won’t do in 2019, and that whole interface has now been revamped similarly to the movie and TV show interfaces previously.

Now, when you visit a podcasts you see a full list of episodes along with their descriptions. Everything looks much more modern and easy to read, and while there is still the option of listening in iTunes we also now have the option to listen via the web, too. There are no playback controls as such, however, and there are certainly no fancy speed adjustment features ala the wonderful Overcast, but it’s a start.

Apple is already working on a dedicated Podcasts app for the Mac as part of its ongoing push of Marzipan, and that is also expected to finally see the explosion of iTunes, with little bits forming new apps as they go. 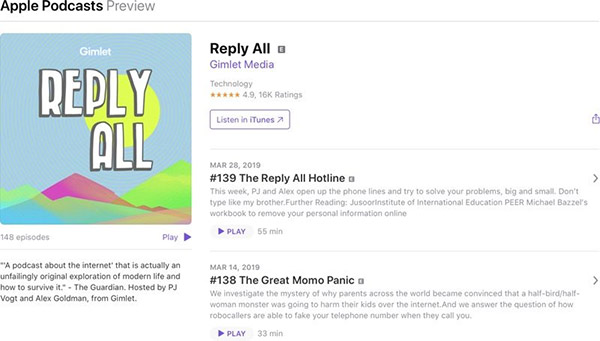 TV, Podcasts, and Music apps are all expected alongside macOS 10.15 later this year, and with content and media now receiving a web-based revamp thins are starting to look up in the world of Apple’s media services.

With a renewed focus on those services, we should probably have seen this coming. Long may it continue.