After a stuttering start, Microsoft’s Xbox One appears to be gaining the respectability of gamers in its duel with the Sony PlayStation 4, and today, the March System Update has arrived. Included are a number of tidy features and improvements, such as screenshot support, party chat improvements and configurable tile transparency, so if you’re an Xbox One user, check the rest of the details below.

The news of the Xbox One March Update has, as ever, been divulged by Larry Hryb, better known as Major Nelson, and having listened to “the most-requested features by fans,” there’s an impressive list of new features for fans to get stuck into.

As aforementioned, screenshots are now a part of the Xbox One’s repertoire, and can be snapped with either a double-tap of the Xbox button on the controller, or a simple “Xbox, take a screenshot” voice command. There’s also an upload app, which lets you manage and sort your screenshots, set them as your background and more, and with new-found jurisdiction over tile transparency, you can tweak your background images to suit your own aesthetic tastes.

The all-new Suggested Friends feature allows you to find new online buddies, while name sharing permits you to disclose your real name with other gamers if you choose, as opposed to just the Gamertag. In a clearly concerted effort to focus on the communal nature of gaming and the Xbox One in general, Microsoft has also dished out some Party chat enhancements, and the Messages app now offers a very useful ‘report spam’ button.

From a privacy perspective, users can opt out of the “anonymous collection” of voice data. You’ll probably want to do this by navigating to Settings > Privacy and online safety > Custom > Share voice search data > toggle OFF, particularly given the recent furor sparked by Samsung’s overly smart TVs.

Australian users can now enjoy Live TV and OneGuide support, and in more good news for those Down Under, the Xbox One Digital TV Tuner is available to pre-order on Oz ahead of its release on March 25th. 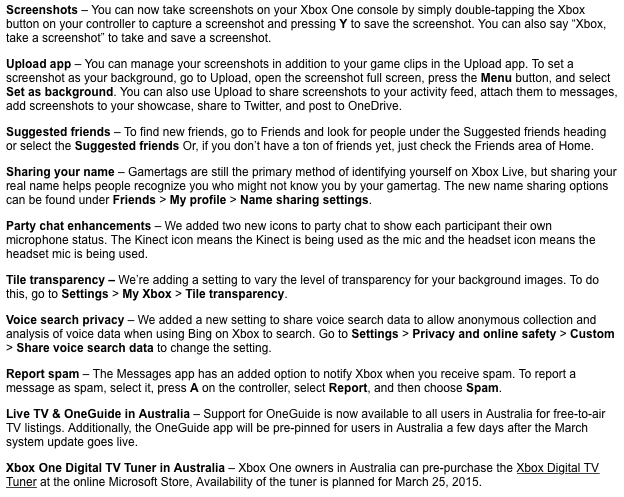 So, there you have it. The Xbox One March Update is packed to the gills, in line with the strong software moves that Microsoft has been making in recent times, and while the Console War is still in relative infancy, the Redmond definitely looks up for the fight.