Xbox One Finally Gets Ability To Take Screenshots

Microsoft has announced that members of its Xbox One Preview Program will be able to start testing new features from its upcoming March update starting right now.

Remember when you bought a piece of hardware and it was stuck that way for its entire life? Those were dark days. Thankfully, progress has meant that companies can update their hardware via software updates, giving it new features and importantly, fixing bugs and problems with the original releases.

Don’t you just love living in the future?

The Xbox One is a good example of what companies can do, and Microsoft’s Major Nelson has been spilling the beans on what will be in the new March software update while also telling those in its Preview Program that they will be able to test some of the big new additions out for themselves starting today.

One of the biggest and most anticipated features is the ability to take screenshots and then either use them as the Xbox One Dashboard’s background or share them via Xbox LIVE. Taking screenshots is a case of either double-pressing the Xbox button on the controller or telling the Xbox One’s Kinect to “take a screenshot.” We’d be going for the button-based option ourselves, but maybe we’re just old .

Other new additions include the ability to change the opacity of Tiles on the Dashboard and new controls over who will be able to see your real name via Xbox LIVE.

Those with Xboxes in Australia will also gain improved television support and new online privacy and security settings will be rolling out to everyone as part of the March update.

The complete set of features are as follows: 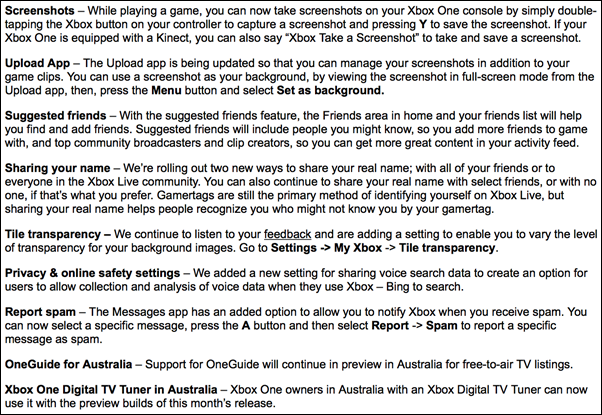 The Xbox One has suffered more than a few knocks in its short life so far, and big software updates are slowly pulling it into feature parity with the arguably more popular PlayStation 4.