The Xbox One has finally arrived today, one week later than its closest rival in the PlayStation 4, and save one or two seemingly isolated incidents pertaining dodgy disc drives, the launch seems to have been relatively smooth and dare we say incident free. One of the main attractions of the new console, besides the fact that it is considerably more powerful and plays a much better game than the Xbox 360, is the second-gen Kinect sensor, which has improved in many ways since the original launched back in 2010. Many of you who’ve gone to pick up the Xbox One will be getting to grips with some of its new and exciting features, but what won’t be shipping is the handy cheat sheet posted online, detailing many voice commands and gestures that Microsoft has neglected to include with the in-the-box literature.

It takes the form of a giant chart, and has been officially created by the Windows maker. It hasn’t been released yet since some details are being refined before prime time, but if you’re looking to get the most out of your shiny new Kinect, you’ll definitely be wanting to check it out.

We’ve already seen various demos of the second Kinect in action thanks to the various videos released by Major Nelson, but having had more than our fill, it’s nice to be able to try these new features out for real.

Although the gesture tutorial is only a surface scratch of what Kinect will eventually be able to do once developers properly get their claws into it, it’s definitely useful to have to hand if you’re an Xbox One owner.

What with Kinect being so greatly improved, one might have presumed this gesture guide would have been thrown in with all the other paperwork, but according to Business Insider, the console had already begun shipping by the time it had been completed. 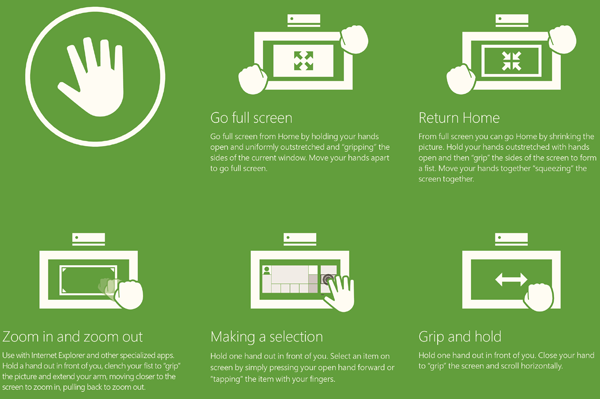 Those of you who’ve purchased an Xbox One, what do you make of the Kinect so far – is it as much of an improvement on the previous gen as you had expected / hoped? Be sure to leave your thoughts with us.