When Microsoft released its Windows 8 Consumer Preview, it was always going to be compared squarely against the biggest, best and some would argue only real competition in the tablet market: the iPad 2.

With the iPad 3 on the horizon, comparing an unreleased version of an operating system in Windows 8 against what will soon be last year’s Apple tablet may seem a little strange. After all, you would expect Microsoft’s effort to come up trumps in plenty of areas considering their engineers have had longer to put the finishing touches on the experience. The thing is though, it appears that in some areas at least, Windows 8 still lags behind the iPad, even before we see the updated hardware and whatever software enhancements come alongside it.

While everyone else was wondering how Windows 8 and iOS compared, The Verge were off finding out themselves, and as a result the Engadget offspring is now home to a video in which top man Joshua Topolsky shows off the key differences and similarities across both platforms.

Right off the bat, and as a group that has been accused of being pro-Apple in the past, we have to set one thing straight: we can’t wait to see where Microsoft takes Windows 8. The potential is most certainly there for all to see, and anyone who watches The Verge’s video will have to admit that the gesture-based Metro interface smokes iOS in more than a couple of ways. Whether that will change with upcoming releases of iOS remains to be seen, especially if the iPad 3 has some changes up its sleeve, too. 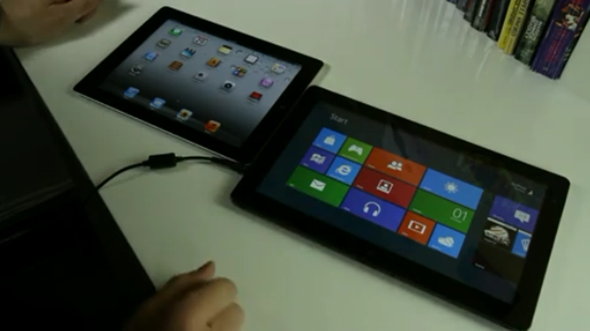 Towards the end of the video however, the Windows 8 tablet shows its true colors, and they’re particularly worrying. While we acknowledge that this is still an early release of Windows 8, the sight of an old Windows desktop appearing at one point, complete with opened windows that seemed to have a mind of their own, is somewhat of a concern. The Windows 8 tablet experience very much depends on Metro being where the user lives, and as soon as a desktop plops onto screen the game is over, and we are back to the bad old days of Tablet PCs.

Surely Microsoft couldn’t make that mistake all over again, could they?

Give Topolsky’s video a watch and judge for yourselves.