Microsoft today has released their most awaited flagship product – Windows 7, officially as of October 22nd 2009. Chief Executive Officer of Microsoft, Steve Ballmer led the launch ceremony which was held at an event in New York City. He was joined in by high delegates from Microsoft & their partners including the CEOs from Dell, HP, Toshiba along with hundreds of beta testers and enthusiasts.

Windows 7 is Microsoft’s newest entry in the popular Windows family and is available as of today through all retail channels for consumers, businesses, developers and enterprises alike. The general impression of Windows 7 has been positive, unlike its predecessor Windows Vista which remained under spotlight for all the wrong reasons.

Windows 7 Launch events are being held in almost all parts of the world to celebrate this big day in Microsoft’s history. We can rightly termed this day as Windows 7 Day! 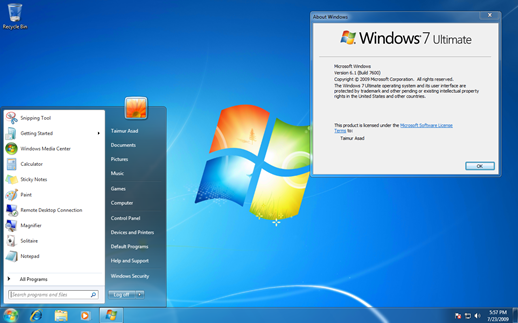 The retail prices of Windows 7 are as follows:

Our heartiest congratulations to Microsoft and the whole team behind Windows 7 for delivering an outstanding product!

We’ll also recommend you all to check out our Windows 7 Themes Gallery, Windows 7 Wallpapers Gallery and the Windows 7 Center for the most complete coverage on Windows 7.