Will Your Android Device Get CyanogenMod 9? This Flowchart Will Tell You

In the last few days, most of the smartphone attention has firmly fixed upon the manufacturers of Android devices as number of them begin to announce, and roll out updates to Android Ice Cream Sandwich for a select number of their devices. Over the last two days we have seen welcome update announcements from Samsung as well as HTC, informing their users that certain smartphones will begin to see over-the-air updates in the coming weeks, eventually bringing Android 4.0 to a wider audience.

With Ice Cream Sandwich being released on October 2011, some Android fans were beginning to lose hope of ever getting a taste of the new features and improved speed that it brings, especially considering that Google have begun to make noises about Android 5.0 Jelly Bean coming during 2012 to maximize tablet compatibility. As mentioned in our Samsung and HTC update posts, although the button has essentially been flicked to roll-out the updates in certain territories, the timescales involved in users actually seeing the update could be impacted by individual networks as they seek to test the build with their own software before allowing it to be rolled out to the masses.

Owners of devices which are yet to be mentioned by either Samsung or HTC, or that are produced by other manufacturers, will obviously be wondering and seeking some clarification about whether or not their device will either support Android 4.0. The option always exists for users to delve into the world of modding, tinkering and rooting of their device, with the people at CyanogenMod 9 producing a simple flow-chart which aims to let device owners know whether or not they will be able to get Ice Cream Sandwich through unofficial means: 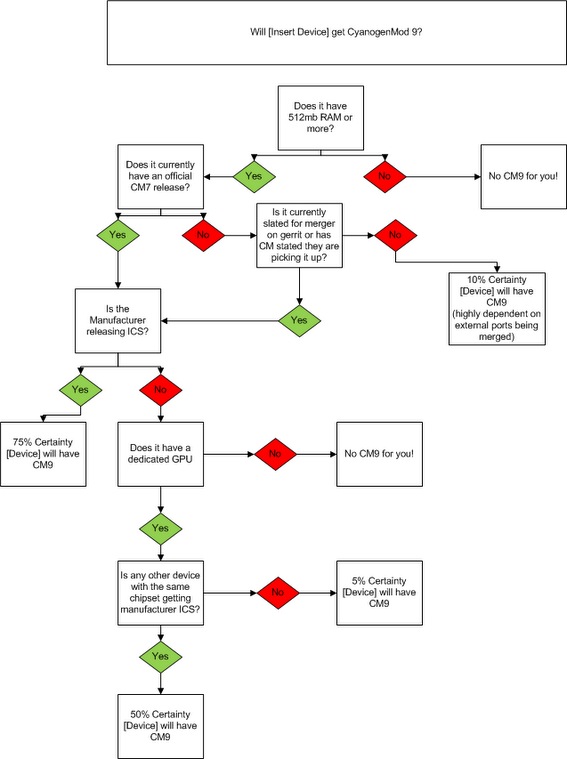 When following the flow-chart through, one of the things which becomes immediately apparent is that availability is generally based upon whether or not the smartphone in question will ever officially receive an ICS update from the producer. Historically, CyanogenMod was a great way for users to stay up to date with OS updates when network carriers wouldn’t provide the software update on time. However, without official and extensive driver support, the team behind the software aren’t really able to achieve much.

If the device you are currently using has less than 512MB of RAM, it seems as though you will need to remain on Android 2.3, although this isn’t necessarily the end of the world considering it will still be supported by the CyanogenMod team, with improvements always likely to be made available if the Android community requests them. If you are an Android user who is dismayed by the result of the flow-chart, then maybe that should be the catalyst required to go out and get that much needed upgrade.