The Apple Watch Series 4 has a built-in ECG and that means it can help to detect some life threatening heart defects, and while the feature hasn’t been live for all that long, it’s already saving lives. Apple CEO Tim Cook retweeted a message today in which a woman shared that her husband was warned of AFib, a situation later confirmed by medical professionals.

Cook shared the tweet in which Elissa Lombardo mentioned that her husband’s Apple Watch reported that he may have AFib, and following a visit to the emergency room, it was confirmed. He later underwent surgery to install two stents, with the man’s wife saying that he is “as good as new” following the procedure.

New Apple Watch saved my husband’s life this week! Only two days old and it diagnosed A-Fib and 150bpm. He went to ER which he never did with same symptoms. Found major blockage in arteries as a result. Two stents later, he is as good as new! Telling the world. Thank U!

This isn’t the first time that the Apple Watch has saved someone’s life, and it’s not the first time that the ECG feature specifically has alerted wearers to potential heart problems. Apple has made much of the company’s move to becoming health focused, and the Apple Watch continues to prove itself to be a valuable addition for anyone concerned about general fitness or more specific heart-related issues.

While all Apple Watch Series 4 models have the ECG hardware in them, only users in the United States can currently take advantage of the feature for regulatory reasons. Let’s hope that changes soon. 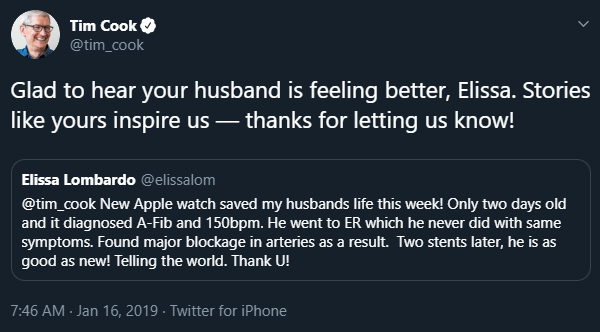