What Happens When You Mix The Kinect With Dubstep? Awesome, Is The Answer! [VIDEO]

Microsoft’s Kinect peripheral has been a revelation since arriving to market just over 18 months ago. The perfect addition to the Xbox 360, it has driven sales of the console up dramatically, allowing consumers to interact with their entertainment box in a manner previously only supported by the Nintendo Wii.

Although the Wii was certainly a niche console when it first arrived (Wii Sports outsold both Tetris and Mario Bros., after all), its crummy hardware and cartoon graphics were easily ousted from contention once Redmond based Microsoft decided to enter the fray. In its short existence, the Kinect has been the fastest selling gadget of all time, and with Kinect 2 following in the future, the interactivity looks set to reach new heights. 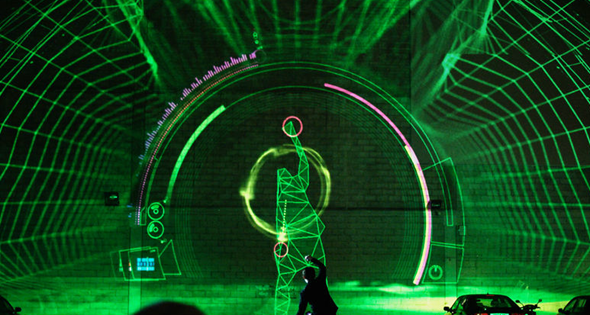 Changing the subject momentarily, Dubstep is a genre of music usually associated with cool. Watch any ten random YouTube clips uploaded in the past year or two, and the chances are, at least one will be backed by some variation of the divisive genre.

The V Motion Project combines dubstep with the Kinect to create what’s billed as a "full-body instrument", and having watched the video a couple of times before sharing it with you guys, I have to say it’s pretty mesmerizing:

It features a guy busting a few jerky moves in the middle of a public place, with a huge wall lit with the controls for different sounds. The Kinect tracks his movements, offering what sounds like a very "cool" dubstep tune.

As per the description on Vimeo, the project is an ensemble of musicians, dancers, programmers, designers and animators, all of whom are utilized to create an "amazing visual instrument," and while I’m not a particularly big fan of dubstep, I can certainly appreciate the creativity that has gone into creating the spectacle.

As the clip goes on, a large gathering of interested spectators forms, each of which smile from ear to ear while taking souvenir shots on their smartphones. Although skeptics might call it an elaborate setup, but the creators ensure that it’s a real technology, and all the sounds heard in the video were being played live.

We’re certainly impressed by this here at Redmond Pie, and will certainly follow the V Motion team keenly to see what they come up with next.