Waterjet Slices iPhone In Half In Just 45 Seconds [Video]

You could be forgiven for thinking that devices like Apple’s iPhone 3Gs would be cherished and kept in a safe place, not only for nostalgic reasons, but for the fact that the value of a mint condition older iPhone will only rise as time progresses. Even more so for those who own every generational device that Apple has produced since 2007. That may be the mentality that a lot of us would have, but it’s certainly not the mindset that can be seen in this new video which pits an iPhone 3Gs against a waterjet cutter, and well you understand what happens next right?

The video itself opens up with an immediate trip down memory lane. The current-generation iPhones may be leagues apart from the iPhone 3Gs in terms of design, size and overall functionality and power, but it’s always great to remember where we’ve actually come from in such a short space of time. Additionally, it’s actually heart-warming to see a device that is still running a pre-iOS 7 version of Apple’s mobile operating system, with the iPhone 3Gs in question not only showing off a legacy version of the firmware, but also showing the iconic Steve Jobs as a contact on the device itself. 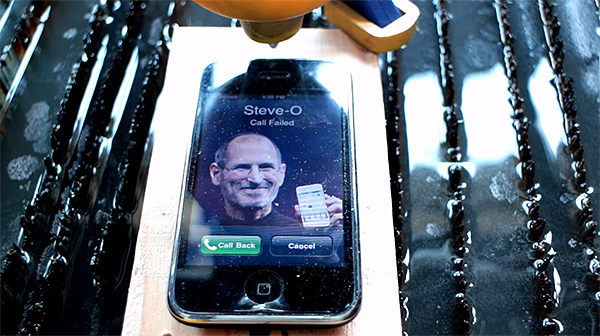 With those things in mind, it almost seems a shame to take a high-powered waterjet and literally slice through the middle of this gorgeous smartphone. Yup, sliced finely, right down the middle. It takes around 45 seconds for the waterjet’s head to make its way from the top of the phone to the bottom and voila! Have you ever seen an iPhone cut so fine like cheese?

It may be a little upsetting to see one of Apple’s device being destroyed in this manner, but we guess it’s no different from the multiple drop, water and smash tests that we see whenever a new iPhone is released. Wanton acts of destruction appears to be what the people of the Internet want to see with alarming regularity. In this instance, it does actually serve a sort of purpose as we get to pull the two parts of the device apart and actually get a look at an internal cross-section of the smartphone. Silver linings we guess.

Check out the video embedded below and tell us what you think.