Today is all about Apple. In an effort to appease those eager developers, and provide the clearest indication yet that the Apple Watch is enroute to becoming a seriously big player in the consumer technology industry, Apple has begun seeding the Golden Master version of watchOS 2 to registered and enrolled members of the of Apple Developer Program.

The immediate availability of the watchOS 2 GM follows on from the platform’s fifth beta that was issued to members of the Apple Developer Program during the first week of August. Those timescales have provided Apple with the better part of four weeks to not only bundle in new features into watchOS 2, but also build on the existing foundation and stabilize what was already there, in preparation for a public release on September 16. 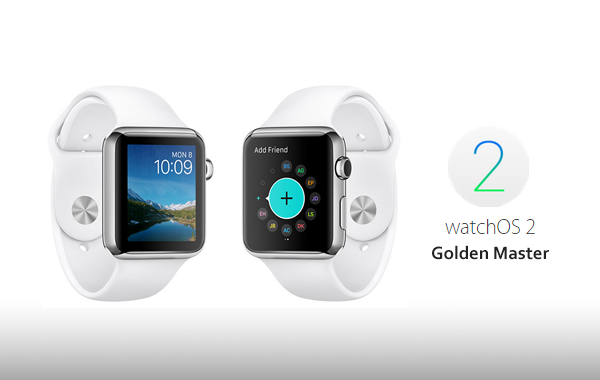 The introduction of iOS 9 to the general public will also coincide with the public availability of watchOS 2 on September 16th. But just what can users expect from the first major update to the Apple Watch firmware? The improvements to watchOS 2 brings about additional functionality to the Digital Crown that allows owners to “time travel” through various events for a period of 72 hours. watchOS 2 also makes it possible to run full native apps on Apple Watch for the first time. Apple today announced that native apps like Facebook Messenger, GoPro app, AirStrip coming to Apple Watch with watchOS 2.

Additionally, new customizable watch faces, a new Apple Music interface, and the addition of third-party “Complications” support makes the arrival of watchOS 2 a solid improvement over the initial firmware that shipped with the Apple Watch when it was first introduced earlier this year. The new watchOS 2 GM release represents what is essentially the final chance for developers to thoroughly test and interact with the firmware.

It is likely that today’s GM seed will be the same build which Apple rolls out to all the Apple Watch owners next week. For a full list of features on what’s new in watchOS 2, check out our post: watchOS 2 Announced: Features And Everything You Need To Know.

Like the pre-released seeds that have come before it, watchOS 2 Golden Master is currently available to download from Apple’s Developer Program website. Developers interested in getting to grips with watchOS 2 GM can do so via the usual download and update mechanism. As always, we’ll dig directly into the GM and keep you updated with anything new and noteworthy that Apple may have introduced in this release.